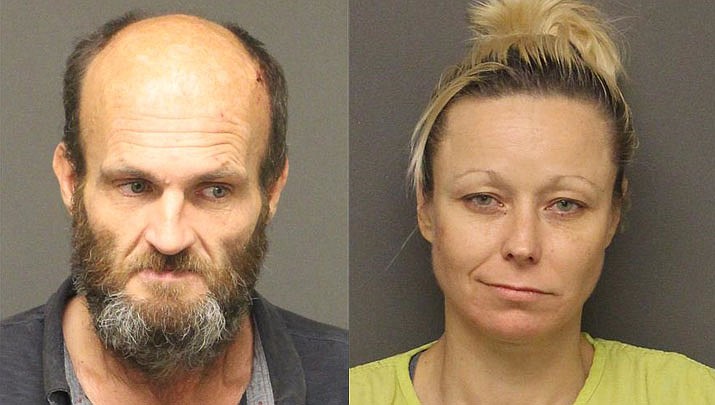 At approximately 9:30 p.m. Thursday, July 11, deputies were on patrol in the area of Calle Ranchita and Camino Colorado and observed a female subject riding a bicycle against the flow of traffic with no rear reflector.

Deputies conducted a stop of the bicycle and the female identified herself as Hegge and advised deputies she had a warrant. A records check confirmed the warrant and Hegge was detained. A search of her backpack revealed approximately 2 grams of methamphetamine and a glass pipe.

Mohave County Sheriff’s Office deputies arrested Theral Dockstader Hammon, 45 of Colorado City, for aggravated assault and resisting arrest, both felonies. At approximately 9 p.m. Wednesday, July 10, deputies responded to a business in the 400 block of Kirkland Road in reference to an assault.

Deputies arrived and made contact with the victim, who also lived at the business location. He advised that a male subject, later identified as Hammon, was ringing the doorbell to the business.

The victim opened the front door and advised Hammon the business was closed, and Hammon continued to ask for a ride to Laughlin, Nevada. The victim told him no and attempted to leave in his truck.

The victim advised Hammon was still hanging around the business and pulled his truck up to the front door. When he got out of the truck and told Hammon to leave, Hammon began punching him and a fight ensued.

The victim attempted to call for help, but Hammon knocked the phone from his hand. Hammon then fled the scene on foot, leaving behind a soda can and a pack of cigarettes.

Deputies began searching the nearby area in an attempt to locate Hammon. The victim’s wife called a short time later, advising she spotted the male subject walking west on Highway 68 near Aztec Road. Deputies responded and made contact with Hammon, asking if he knew anything about the assault.

Hammon appeared to have blood on his knuckles and rips in his shirt, but denied involvement in the assault. Deputies advised Hammon he was under arrest for the assault, and placed him in restrains. As deputies were walking Hammon to their patrol vehicle, he became combative, yelling that the deputies had no right to arrest him.

Hammon continued to yell at deputies during a pat search, and attempted to pull away from them, when deputies placed him on the ground until another deputy could arrive to assist.

A search of the property carried by Hammon revealed matching soda cans and cigarettes to the ones found on scene. Deputies also located jail paperwork that stated Hammon had been released from the facility approximately four hours before this incident.

Theral Dockstader Hammon was arrested and transported to the Mohave County Adult Detention Facility for the above charges.