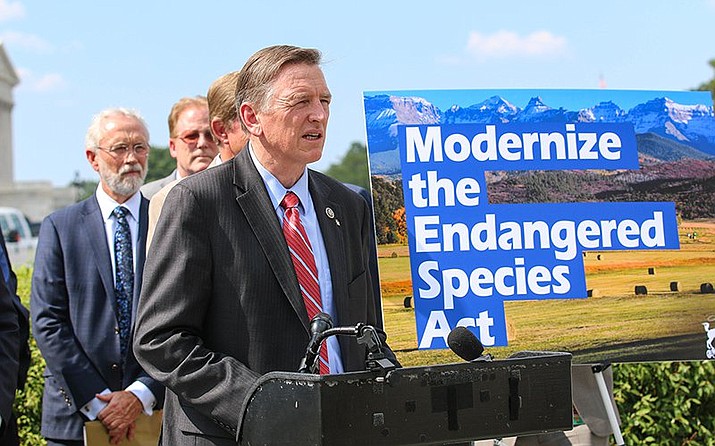 The House Committee on Natural Resources last week passed a potential ban on uranium mining in Grand Canyon area, but opponents say it’s doomed to fail before a congressional vote.

The Grand Canyon Centennial Protection Act, also known as HR 1373, is a bill that has for 10 years been pursued by Congressman Raul Grijalva, of Arizona’s 3rd Congressional District. If signed into law, the act would withdraw more than 1 million acres of Arizona federal lands surrounding the Grand Canyon, including areas of Mohave County, from use by Arizona mining interests.

According to District 4 Congressman Paul Gosar, R-Prescott, the bill is a “million-acre land-grab” that serves “environmental extremists” above the interests of American citizens. “(HR 1373) is an attack on my district, and opposed by the people in my district,” Gosar said Wednesday in a public statement. “This bill will kill jobs, harm local economies, infringe on private property rights, threaten national security and undermine American energy security.”

According to Mohave County officials, uranium mining could represent a $29 billion industry to the county. But for seven years it’s been halted by a 20-year moratorium on uranium mining throughout the Grand Canyon region.

The moratorium was to end in 2032, but Grijalva’s bill would make the ban permanent. “We should not be permanently locking up more than 1.32 million acres of land in Arizona and New Mexico in order to appease Democrat special interests,” Gosar said.

Gosar says the bill is fundamentally flawed. It targets land containing valuable deposits of minerals including more than 326 million acres of uranium reserves – the highest grade of uranium in the nation by a factor of six, Gosar said. If the ban on uranium mining in the Grand Canyon area succeeds, Gosar said, it will reduce valuable revenues for education, roads, hospitals and infrastructure in northwestern Arizona.

According to Gosar, future success for HR 1373 may be unlikely. “(HR 1373) isn’t worth the paper it’s printed on, and has zero chance of being signed into law,” Gosar said.

The Grand Canyon Centennial Protection Act was introduced into the House of Representatives in February, and has already been approved by the House Natural Resources Subcommittee on National Parks, Forests and Public Lands. With its passage in the Democrat-led Committee on Natural Resources this month, the bill may now be presented before the House of Representatives for an official vote.

Gosar proposed five amendments to HR 1373 in the House Natural Resources Committee as of July 17, according to congressional records.