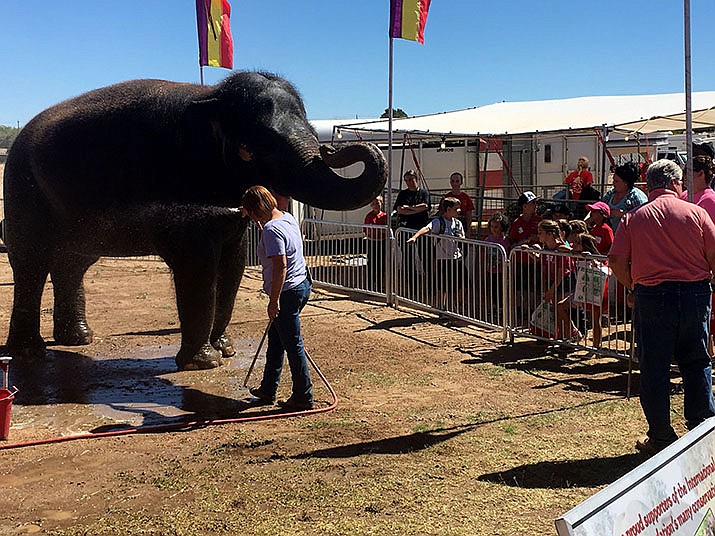 The most recent resolution, which was removed from the agenda by the mayor, dealt with “the public safety aspect of these animals: elephants, lions/tigers, and bears,” according to the agenda. (Daily Miner file photo)

KINGMAN – Even though Mayor Jen Miles pulled the “Dangerous Animal Ban” she put on Council’s last agenda, Mohave County Fairgrounds Manager Tim Woods is worried the City hasn’t seen the last of what he sees as California animal rights activists trying to gain traction in Arizona through Kingman.

The most recent resolution, which was removed from the agenda by the mayor, dealt with “the public safety aspect of these animals: elephants, lions/tigers, and bears,” according to the agenda.

However, the mayor knew she would not get the votes she needed to pass the resolution, and said “But tonight in Kingman, Arizona, I am not going to ask any members of this Council to vote on a resolution in which a ‘no’ vote does not support public safety or the values established by the previous resolution.”

Woods doesn’t think there’s a safety issue. He said he has found no evidence of a dangerous animal attack in Kingman.

“With all that being said, in the past has there been a death? Has there been some injuries? Of course there has,” Woods said. “Just like there’s been injuries in every kind of thing that people do, but you can’t regulate 100% safety for people. You can’t.”

“I think the Board of Supervisors has been discussing that and looking at some factors,” Miles said in regards to relocation of the fairgrounds. “But I think this one resolution that we proposed would not be a defining criteria for whether they’ll relocate the fairgrounds.”

He’s not the only one concerned, as Woods stated the Arizona Fair Association is worried, too.

The mayor directed City staff to take a different, “administrative” approach to address the matter. That will see staff redetermine the amount of liability insurance required for those seeking to come to Kingman with performing wild animals. Woods has concerns about that as well.

“Depending on what they set as the minimum liability, they can regulate a business where they don’t even want to come to Kingman because it’s too expensive for their insurance and their fees to put on their show,” Woods said.

The mayor said the amount of minimum liability is up to City Manager Ron Foggin and his team.

“The city manager and his management team, which includes risk management, will determine the amount they believe is appropriate for entities coming into the City with wild animals,” the mayor said. “That is a decision they’re going to make, and that liability insurance amount plus any other documentation they feel is necessary is what they will request as part of their permitting process.”

Foggin said the City is still in the beginning stages of looking at the insurance issue.

“What ultimately those limits are set for, I don’t know yet,” he said. “I know that we ultimately want to get it so that if there was an issue, an escaped animal or whatever, and there was property damage, that the company is able to cover the costs of damages and injuries to our citizens.”

What’s more is that should such resolutions continue to appear before City Council, Woods said that gives one Mohave County supervisor additional fodder for what some believe is an attempt to relocate the fairgrounds to Lake Havasu City.

“Yes, it could,” Woods replied when asked if animal ban ordinances and resolutions could result in the Mohave County Fairgrounds being relocated to another city. “Of course, the supervisor that was leading the charge to change the lease, Buster Johnson, who actually wants the fairgrounds in Havasu, this is perfect fodder for him.”

He said the supervisor could point to the proposed resolutions as a reason for why the fairgrounds should move from Kingman.

“I’m not saying it’s going to happen, but it definitely makes it a possibility,” Woods said. “I’ll fight tooth and nail to keep it from happening, but yes, they’re giving Supervisor Johnson plenty of fodder to lose the fairgrounds in Kingman.”

However, Johnson told The Daily Miner that he does not wish to relocate the fairgrounds to Lake Havasu City.

“I’ve never said that, I’ve never thought that,” he said. “The biggest thing in our county, we’re a widespread county. If we put something in Havasu, it makes it hard for the people of Kingman and Bullhead to come.”

He added the only reason he has spoken about relocating the fairgrounds in the past is because a new location could mean more space. Johnson said the fairgrounds has run out of space and currently sits in a residential neighborhood, which causes problems. Should it move, Johnson said he’d like to see the facility perhaps in Golden Valley.

The supervisor declined to comment on dangerous or exotic animal bans in Kingman.

“I think the Board of Supervisors has been discussing that and looking at some factors,” the mayor said in regards to relocation of the fairgrounds. “But I think this one resolution that we proposed would not be a defining criteria for whether they’ll relocate the fairgrounds.”