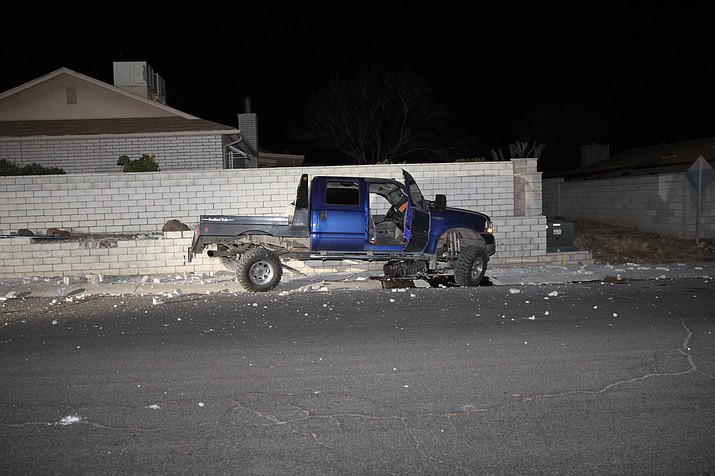 A Kingman resident who was driving the blue Ford F-250 died after being flown to Sunrise Medical Center in Las Vegas. The crash occurred on Gordon Drive on Friday, July 19, 2019. (KPD photo)

KINGMAN – An incident where a Ford F-250 truck crashed into a block wall near Gordon Bay Drive on Gordon Drive at about 11 p.m. Friday, July 19 has resulted in the death of Kingman resident Charles Ray Gross.

Officers arrived to the scene to discover that a blue Ford F-250 had crashed into the wall. Gross, 36 of Kingman, was partially ejected from the vehicle. He was transported to Kingman Regional Medical Center before being flown to Sunrise Medical Center in Las Vegas with life-threatening injuries.

The Clark County Coroner’s Office confirmed Gross had died from the injuries he sustained in the crash Tuesday, July 23. The investigation determined Gross was northbound on Cantle Drive when he failed to negotiate the curve onto Gordon Drive. He then crashed into a block wall at the intersection of Gordon Drive and Gordon Bay Drive.

Speed and alcohol are believed to be factors in the crash, and the investigation is ongoing.