Elite 8: National Spelling Bee too easy for octet of champs 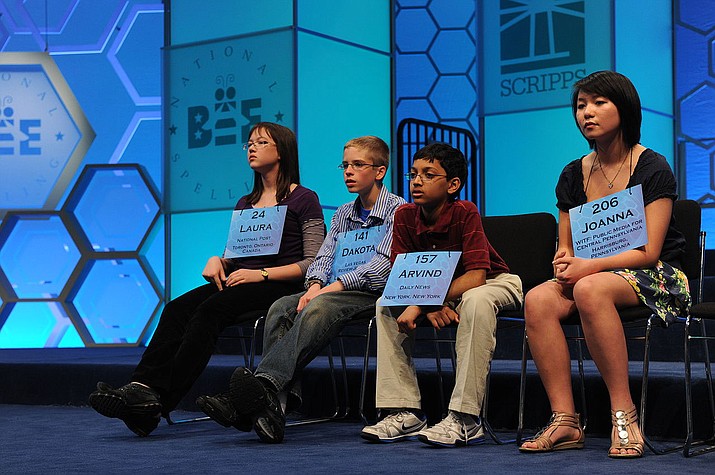 In this file photo, contestants wait during the 2011 Scripps National Spelling Bee. In this year's Bee, all eight contestants received the full winner's freight of $50,000 in cash and a new, custom-designed trophy, because Scripps simply could not come up with words difficult enough to challenge them. (Photo by Themightyquill, CC by 2.0, https://tinyurl.com/y5cueftx)

OXON HILL, Md. (AP) – There were warning signs throughout a marathon day of spelling that this Scripps National Spelling Bee would not conclude like any other in the event's 94-year history.

Rishik Gandharsi sensed it as he stepped to the microphone for the ninth round of Thursday night's prime-time finals, when he was one of eight spellers remaining onstage.

"Just out of curiosity," Rishik asked pronouncer Jacques Bailly, "do you happen to know what time it is?"

It was 11:18 p.m. Forty-five minutes later, Rishik was a champion. So was Erin Howard. So were Saketh Sundar, Shruthika Padhy, Sohum Sukhantankar, Abhijay Kodali, Christopher Serrao and, finally, Rohan Raja. The eight co-champions closed out the bee by spelling 47 consecutive words correctly.

All eight received the full winner's freight of $50,000 in cash and a new, custom-designed trophy, because Scripps simply could not come up with words difficult enough to challenge them.

There was plenty of concern after the bee ended in ties three years in a row, from 2014-2016, that the very best spellers might be too good for the bee. Scripps came up with a written tiebreaker test of both spelling and vocabulary, a solution no one was thrilled about. After two years in which the test wasn't needed, bee officials decided it was too burdensome on the spellers and got rid of it.

The rules going into this year's bee called for, at most, three co-champions. A contingency plan for even more winners was developed on the fly Thursday afternoon, after bee officials evaluated spellers' performance in the early final rounds. It took 5½ hours to narrow the field from 50 kids to 16.

"We are closely connected to the difficulty level at the program, so we are quite aware of the rising level of competition. This does not actually surprise us at all," said Paige Kimble, the bee's executive director. "We didn't go into the competition tonight not knowing that this was a possibility and not having a plan."

Bailly, the longtime pronouncer and the beloved public face of the bee, broke the news to a stunned crowd in a convention center ballroom outside Washington after the eight eventual champs had gone through two consecutive perfect rounds.

"Champion spellers, we are now in uncharted territory," Bailly said. "We do have plenty of words remaining on our list. But we will soon run out of words that will possibly challenge you, the most phenomenal collection of super spellers in the history of this competition."

There would be three rounds, Bailly said, and anyone who got through them would be a champion. No one came close to missing a word.

For the winners, fatigue was the only real concern. Shruthika staggered to the microphone for her last few words and greeted Bailly with a wan, hoarse voice.

"I'm very glad they stopped where they did," said Shruthika, a 13-year-old from Cherry Hill, New Jersey.

"I feel like there was no better way to do it," said Saketh, who's also 13 and lives in Clarksville, Maryland. "I don't know if I would've won if they kept going. I was super tired because it was like 12:00, and I was exhausted."

Kimble has long insisted that Scripps would never subject spellers to an endurance contest, and she had no regrets about the way it ended.

"Look at these kids. They worked so hard and they achieved so much," Kimble said. "I think it's the best night ever for the bee."

But there were murmurs of discontent among the ex-spellers and spelling experts in the crowd. The words, they said, were just too easy. Naysa Modi, last year's runner-up who surprisingly missed out on the finals this year because of her written test score, was in tears as the confetti fell. She said the winners were deserving, but the final words weren't tough enough for them, or her.

Among the words that earned spellers a share of the title: "auslaut," ''palama," ''cernuous" and "odylic."

"This would never happen at my bee," said Rahul Walia, founder of the South Asian Spelling Bee, where Sohum defeated Abhijay for the title last year. He said Scripps was just scratching the surface of words that could confuse or trip up elite competitors.

The South Asian bee and the North South Foundation bee, national competitions available to spellers only of South Asian descent, are among the many reasons Indian-Americans have come to dominate the Scripps bee over the past two decades.

Erin was the first champion without South Asian heritage since Evan O'Dorney in 2007.