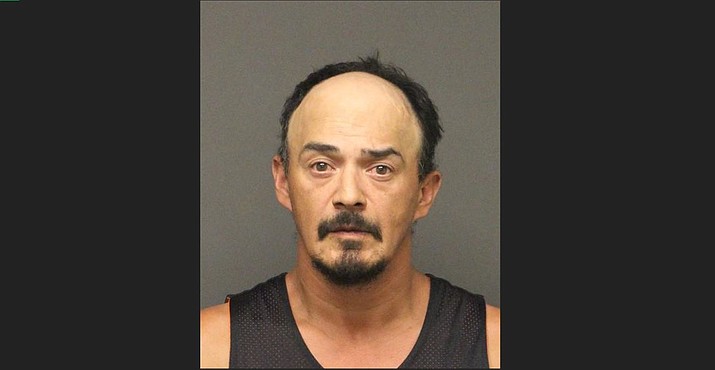 KINGMAN – Hatchets were flying near the 2900 block of Spinner Bair Drive before Mohave County Sheriff’s Office deputies responded to a call at approximately 3:30 p.m. Friday, May 31 in reference to a disturbance.

The reporting party advised a male subject, later identified as Ramon Trevino Ortiz Jr., 45 of Kingman, had thrown an axe at their vehicle and fled the scene on foot. Deputies arrived to the scene and discovered the victim was at his residence when he saw Ortiz walking through his property.

A verbal argument ensued after the victim confronted Ortiz, and he was muttering about unknown things. The argument escalated and Ortiz produced hatchet from his waistline, and began swinging it around and lunging toward the victim.

The victim and a friend secured themselves inside a vehicle when Ortiz threw the hatchet at the vehicle, causing damage to the vehicle and shattering a light. Ortiz ran to a nearby residence, leaving the scene.

Deputies later discovered that Ortiz stole a blue truck from the nearby residence to where he fled. Deputies contacted the homeowner who advised deputies that Ortiz had been inside his residence before and knew where the keys to the truck were kept.

Deputies responded to Ortiz’s residence and canvassed the area, but didn’t find any traces of him.

Deputies received a call the next day from a neighbor who spotted the stolen truck in the desert approximately 300 yards away from Ortiz’s residence. The neighbor advised he saw significant damage to the truck, and parts were on the ground. He also advised he could see Ortiz placing items on the ground of his driveway to hinder vehicles from driving in.

Deputies arrived at the residence of the 8600 block of North Avenida Obregon and found pieces of wood on the ground with nails sticking out.

Deputies saw Ortiz walking on the property toward the vehicle and gave a direct order for him to get on his knees with this hands in the air. Ortiz complied and was placed into custody. When asked, Ortiz allegedly admitted to stealing the vehicle.

Oritz was arrested for aggravated assault, second degree burglary, theft of means of transportation, all felonies, misdemeanor disorderly conduct and an active arrest warrant. He was booked into Mohave County Adult Detention Facility without incident.