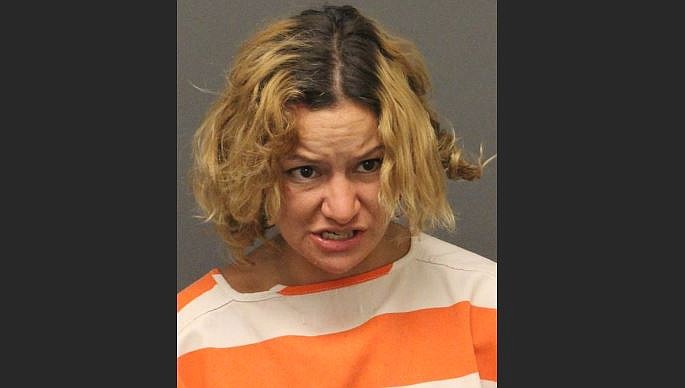 KINGMAN – Amanda Lynnette Barr, 33 of Kingman, was arrested by Mohave County Sheriff’s Office deputies Sunday after they received a call that she had been threatening to kill multiple neighbors with a knife.

Deputies responded at around 11:20 a.m. Sunday to the 3100 block of Northfield Avenue, where they were told by the reporting party that a female subject, identified as Barr, had been threating to kill neighbors with a knife.

Deputies then saw Barr, who they knew from previous incidents, sitting on a porch nearby. She reportedly began yelling obscenities at the deputies. Law enforcement personnel observed what appeared to be a broken glass jar in one of Barr’s hands and a knife sticking out of her waistband. When told to drop the item in her hand, Barr tried to run away but was apprehended after a short foot pursuit.

Once Barr was on the ground, deputies struggled to control her as she tried “several times” to slash the deputy in the face with the broken jar. A second deputy then arrived and was able to assist the other with putting Barr in restraints. According to MCSO, Barr continued to kick at deputies while being taken to the patrol vehicle and even continued the behavior while being seen by medical personnel.

Deputies made contact with neighbors in the area, who said Barr had been in her yard screaming and yelling. They said Barr would run at them with the knife and threaten to kill them when asked to quiet down. One neighbor said he returned home to find Barr in his yard and one of his windows broken.