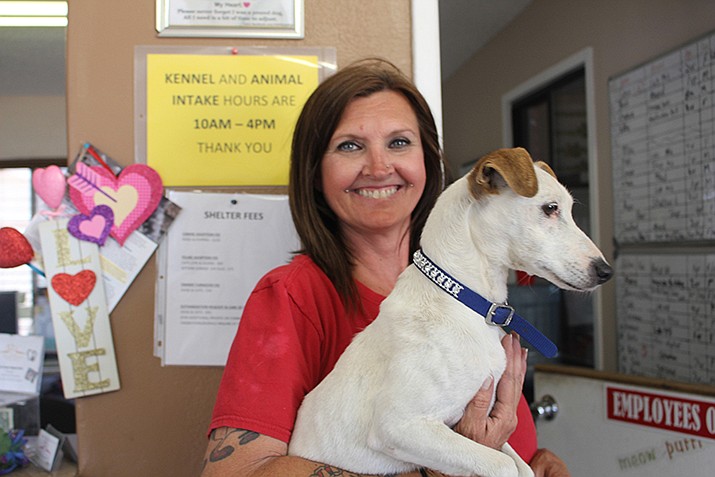 Lead Kennel Tech Janette Silva with one of her favorites. (Photo by Agata Popeda/Daily Miner)

KINGMAN – The issue surrounding the Kingman animal shelter awakes strong emotions among the community, and it took a large part of the recent Mohave County Board of Supervisors meeting on June 3.

Western Arizona Humane Society current vice-director Lynn Kannianen informed the board that there is a community effort to start the Mohave County Humane Society. Kannianen said they need approximately six months before they would be ready to take over from the county.

But WAHS withdrawing from shelter services in Kingman, which forced the county to step in in the first place, is only part of the problem. The other one is the condition of the current facility that is a county-owned building. In fact, WAHS resigned mainly because it found running the old facility financially impossible.

Supervisor Jean Bishop from District 4 started a motion to designate $3 million from the county’s capital fund to build a new animal shelter. This proposal met resistance from Supervisor Ron Gould from District 3, who said he would need some monetary participation from the City of Kingman. That led to a discussion on the county’s animal control responsibilities, and that both Lake Havasu City and Bullhead City do not rely on the county in terms of animal shelter services.

Supervisor Buster Johnson from District 3 expressed his concern with the county taking the shelter in-house and reminded all interested parties that the Mohave County Sheriff’s Office is responsible to provide animal control for a limited amount of hours only. Supervisor Gary Watson and Chairman Hildy Angius agreed that Kingman must come to the table and “pony up.”

While Bishop, encouraged by more voices and clapping from the audience, pressed hard to adopt the motion to build a new shelter today, others questioned if this is a priority (Johnson) and if it should be built with county money at all (Gould).

Seeing no easy solution on the horizon, the board eventually agreed to discuss the possibility of building a new animal shelter during another meeting. Angius suggested the proposed $3 million is too much and the amount should be reevaluated.

“We don’t have to build a Taj Mahal like Lake Havasu,” she said.

For now, the board agreed to take over the shelter, keeping current staff to make the transition as seamless as possible. The employees will be hired for six months as “full-time temporary,” said County Manager Mike Hendrix.

According to the sheriff’s office, the current facility is clean and organized, and the staff is doing a good job. The poor condition of the building has been an issue “since Buster [Johnson] joined this board,” said Tracy Langley from Kingman semi-jokingly, who served on a 2017 committee that studied the problem in depth.

Supervisor Johnson joined the board 23 years ago.