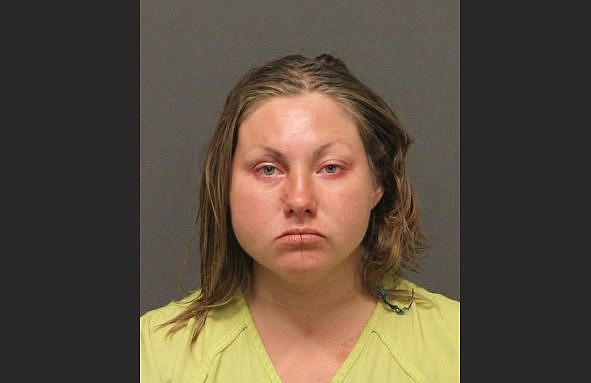 KINGMAN – Mohave County Sheriff’s Office deputies responded to a call at 8:20 a.m. Tuesday that began as a civil problem and ended in the arrest of 30-year-old Jessica Dawn Adams of Dolan Springs for unlawful imprisonment.

Deputies were dispatch to a residence in the 16000 block of North Pierce Ferry Road in Dolan Springs on a call that was originally for a civil problem. The reporting party and property owner told deputies that a female subject, identified as Adams, was not supposed to be on the property.

The property owner also said she received text messages from a victim inside the trailer who stated she had been threatened by Adams. Those messages had stopped and the property owner was concerned for the safety of the victim.

Deputies arrived and knocked on the door of the residence in an attempt to make contact, however, heard no one inside. The property owner gave deputies a key, and while the door knob was unlocked, the door had been secured from the other side. Deputies were then given permission to enter the residence by any means necessary.

Law enforcement personnel found a window on the east side of the residence that had been boarded up from the inside. They removed the boards on the window at which time they saw Adams inside the residence standing near the elderly victim.

Adams refused to unlock the door when instructed to do so, and when deputies told the victim to unlock the door, Adams told her not to. In the course of speaking with the two women in an effort to diffuse the situation, deputies were able to grab Adams’ arm when she got close to the window. That gave the victim an opportunity to unlock the door and let deputies inside the residence. Adams was then placed in restraints and detained.

Jessica Dawn Adams was arrested for felony unlawful imprisonment and booked into the Mohave County Adult Detention Facility without incident.