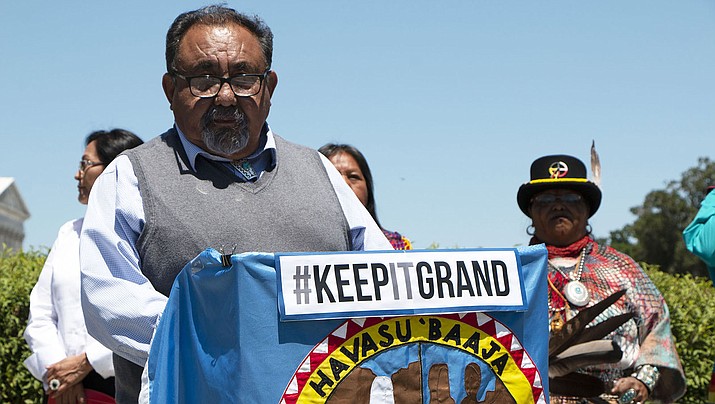 WASHINGTON – Tribal and environmental officials urged House lawmakers Wednesday to protect sacred land and natural resources by supporting a permanent ban on mining on just over 1 million acres around the Grand Canyon.

The “Grand Canyon Centennial Protection Act” would prohibit all mining in the affected area, but supporters were focused on the uranium mining that has a troubled history on tribal lands.

“Uranium mining has already poisoned and will continue to poison the springs and waters of my Grand Canyon home,” said Havasupai Councilwoman Carletta Tilousi at a House Natural Resources subcommittee hearing. “It will be poisoning the land, the plants, the animals and the people that live there, including all the visitors that come to visit the Grand Canyon.”

But critics attacked those claims as “scare tactics.” Uranium mining poses no more threat than the area’s naturally occurring uranium, they said, and the “ill-conceived” and “misguided” bill would cost the region billions in potential economic activity.

“You can have your clean air, clean water and mining too,” said Rep. Paul Gosar, R-Prescott, who grilled witnesses at Wednesday’s hearing. “It would seem to me that it would be better to take it out than to leave it in.”

The bill would withdraw 1,006,545 acres of federal lands north and south of Grand Canyon National Park from mining. The Obama administration in 2012 instituted a 20-year ban on uranium mining on those lands.

But the Trump administration has been pushing for more-open mining policies, with the Commerce Department on Tuesday releasing recommendations to safeguard U.S. access to a list of minerals, including uranium, that are considered critical to the nation’s economy and defense.

Rep. Raul Grijalva, D-Tucson, sponsored the bill that would make the Obama-era moratorium a permanent ban.

“It’s a simple piece of legislation. It takes what Obama did with the moratorium and makes that ban on mining permanent, simple as that,” Grijalva said at a Tuesday news conference in support of the bill. “It does not create a new monument. It doesn’t include any public land designations. It merely protects what exists now.”

Tilousi said the ban is needed to protect her village, which is on the floor of the Canyon, as well as the region that draws millions of tourists a year from around the world.

Tilousi said the Havasupai – which means “people of the blue-green water” – worry that mining will contaminate the waters that not only sustained them but have been a source of tourist revenue for many years.

It’s not just her village, she said. The Colorado River is a primary water source for millions in the Southwest, in cities such as Las Vegas, Phoenix, Tucson and Los Angeles.

“According to the National Academy of Science there are no safe levels of consumption of ionized radiation, the only safe level is zero, Tilousi said.

But Mohave County Supervisor Buster Johnson cited a U.S. Geological Survey report that said water samples from 428 sites in northern Arizona showed dissolved uranium concentrations were no different in areas with mines than in areas without.

“I can tell you if I had the slightest indication that mining would affect the canyon or the health of the people I represent I would be adamantly opposed to it,” Johnson said during testimony to the committee.

Both Johnson and Gosar stressed the potential economic benefits from uranium mining, which they valued at $29 billion. Gosar said mining could provide 2,000 to 4,000 jobs between Arizona and Utah, while helping the U.S. reduce its dependence on foreign nations, which provide 97% of the country’s uranium for nuclear power.

Johnson said sufficient environmental protections are in place even without the bill.