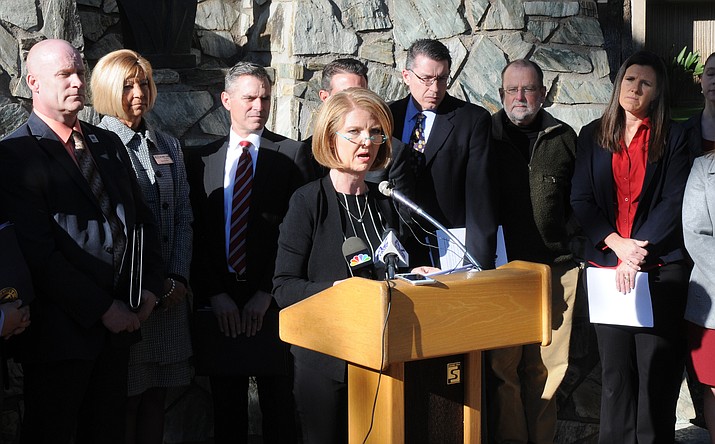 Sen. Heather Carter speaks about her legislation concerning vaping in this Jan. 8, 2019 file photo. Carter, along with Sen. Kate Brophy McGee, were responsible for the defeating a bill setting up a program to dissuade women from seeking abortions pushed by Cathi Herrod, who leads the powerful social conservative group Center for Arizona Policy. (Capitol Media Services file photo/Howard Fischer)

PHOENIX (AP) – A powerful social conservative group that pushes anti-abortion bills in each session of the Arizona Legislature struck out this year after a last-minute proposal to fund a program designed to dissuade women from seeking to terminate their pregnancies hit a roadblock in the state Senate.

Center for Arizona Policy President Cathi Herrod said the rare defeat shows the state Senate is no longer "pro-life" after two Republicans joined all Democrats in opposing the bill.

The loss for Herrod this year comes as several conservative states have approved stringent abortion restrictions, including a complete ban in Alabama and bans in three other states once a fetal heartbeat can be detected, or as few as six weeks into a pregnancy. All are expected to face court challenges.

Republican Sens. Kate Brophy McGee and Heather Carter killed Herrod's proposal on the Legislature's last day of the session. They mainly objected to spending $2.5 million for the anti-abortion service when their request for only about $1 million to fund a nonprofit state hotline that offers referrals for a myriad of services did not make the cut.

"I've had a bill for two years now that would fund our statewide 211 system. We've asked for $1 million to continue that service," Carter said during the Senate vote. "I also had a bill this year that would provide prenatal dental care to pregnant women, which all of the research says not only would bring about better birth outcomes for the mother but for the child as well. I find it ironic that we can fund money to do this but we can't find to do the other two programs and for that I vote no."

Herrod had pushed for an amendment to the 211 bill that would have barred it from providing any referrals for abortion services, and Brophy McGee agreed. There were only a handful of abortion-related calls to the 211 service out of nearly a million calls. However, the proposal still didn't make the final budget cut.

Then, in the final weeks of the session that ended early on May 28, Herrod's plan to spend nearly three times that amount to fund the anti-abortion program emerged. It proposed spending $2.5 million in each of the next three years for a helpline that seeks to steer pregnant women away from abortions. House lawmakers scaled it back to a one-year program and passed it with only GOP support.

Brophy McGee and Carter sided with the Democrats in the Senate to kill the proposal.

In an impassioned floor speech explaining why she was opposing Herrod's bill, Brophy McGee pointed to the 211 hotline and said she "cannot reconcile the failure" of not funding that program that fields nearly a million calls a year with the push to fund the new anti-abortion program.

"I know that embedded in those calls for help are pregnant moms struggling to find services or help having already made the decision to keep that baby," she said.

Herrod said the decision by Carter and Brophy McGee shows they are not "pro-life."

"The pro-life vote was to support funding for women seeking an abortion access to services to choose life," Herrod said in a Wednesday interview. "One can't say they're pro-life and vote against the funding."

Carter disagreed and noted that both she and Brophy McGee have previously voted for restrictions on abortions that Herrod has pushed through the Legislature in the past decade.

Brophy McGee echoed those thoughts, saying while she hasn't always supported Herrod's bills, "I am pro-life. And I would hope that everybody in the state of Arizona is pro-life."

"My focus in the Legislature is ensuring that these kids get here, and if they're born in dire circumstances that we do everything we can to help them be independent and successful," she said.

It's not the first time Herrod has angered Arizona Republicans who generally support tightening abortion restrictions.

Herrod left former Gov. Jan Brewer incensed in 2013 by trying to connect an anti-abortion bill with Brewer's top priority that year, expanding the state's Medicaid program as part of the state budget deal. Herrod's efforts threatened the coalition of Democrats and some Republicans that Brewer had assembled to get majority support because Democrats opposed the proposal.

"We were very upset. It was such a carefully put-together budget that any tug at any (part) of the budget was going to blow it sky high," Brewer said this week. "It was very, very frustrating to see somebody playing with everything in the budget because of their self-interest."

Republicans who control both chambers of the Legislature usually pass anti-abortion bills backed by Herrod each session. GOP Gov. Doug Ducey has routinely signed them, even those on shaky constitutional grounds. Herrod's powerful social conservative group pushes that legislation as well as religious freedom and school choice bills. It puts out a yearly voter report card grading lawmakers on those issues and its support or lack of it can influence election results.

Herrod didn't push any new abortion restriction legislation this session, a move she said was mainly due to past efforts that have made the state well-known for its tight restrictions on the procedure. Another factor: the 9th U.S. Circuit Court of Appeals, which has blocked some of Herrod's bills from going into effect. That leaves it to conservative-led states in other circuits to push for limits the U.S. Supreme Court has blocked in the past but may revisit with a new conservative majority following two appointments by President Donald Trump.

"I think that obviously there's a concern about the 9th circuit," Herrod said. "And Arizona has passed significant pro-life legislation. Now the analysis has to be what's happening in other states, in other circuit courts, in the U.S. Supreme Court and what would work for Arizona and what works in other states.