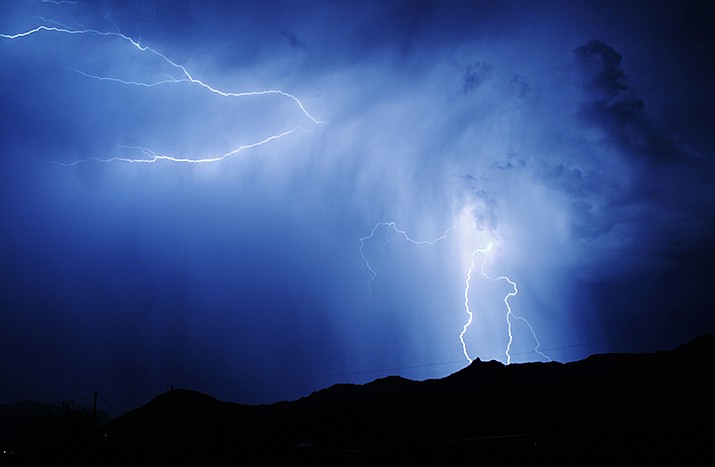 KINGMAN – It’s approaching that time of year when monsoons come and go as they please, and to that end, Gov. Doug Ducey has proclaimed June 9-14 to be Monsoon Awareness Week.

“Monsoon activity may still be a few weeks away, but now is the time to get ready,” Ducey said in a press release. “During Monsoon Awareness Week, Arizona is taking action to make sure the public is aware of how to prepare and stay safe during these storms.”

“Monsoon season can become dangerous with little or no warning,” said Wendy Smith-Reeve, deputy director of the Arizona Department of Emergency and Military Affairs, in the release. “It’s important for Arizonans to take caution and understand the risks this season presents when traveling through the state.”

The Arizona Emergency Information Network has some tips for how people can stay safe during and prepare for a monsoon. Arizonans are encouraged to plan by writing and rehearsing a family communication plan including an identified meeting place and out-of-town contacts.

PULL ASIDE • STAY ALIVE by ArizonaDOT

They should prepare by building emergency “go-kits” with nonperishable food and water to last family members and pets for at least 72 hours. The kit should also include prescriptions, copies of important documents and a weather radio. To learn about hazards in the area, go to https://ein.az.gov/.

Other well-known tips include “Turn Around, Don’t Drown,” which speaks to the importance of not driving through flash floods that can carry most vehicles away with 18 inches of water, and “Pull Aside, Stay Alive.” The latter speaks to how monsoon winds can cause “dense blowing clouds of dust” that reduce visibility.

And since monsoon season occurs during Arizona’s hottest months, Gov. Ducey is reminding people of the importance of staying hydrated and recognizing the dangers of extreme heat and warning signs of dehydration, heat exhaustion and heat stroke. The press release recommends reducing exposure to the sun and heat during peak hours.

Tips for preparing for and handling extreme heat can be found at https://ein.az.gov/hazards/extreme-heat.

Time to get ready for Arizona's summer monsoons
Monsoon Season: 2020 Kingman monsoon conditions up in the air
No immediate relief from high temperatures in sight
Rain, thunderstorm possible on Saturday
Monsoon conditions in Kingman possible over next few days
Event Calendar