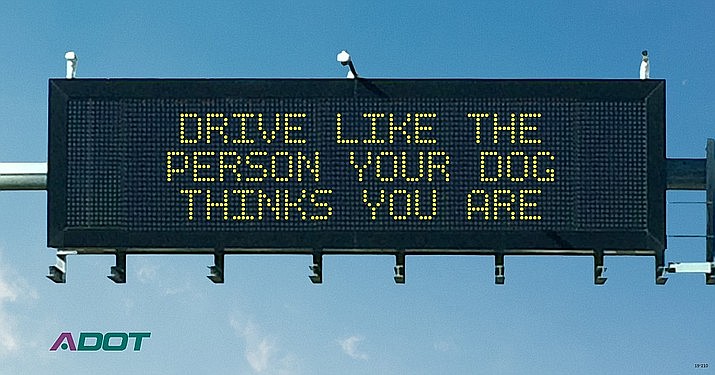 KINGMAN -- Man’s best friend and a clever play on words were the big winners in the Arizona Department of Transportation’s 2019 Safety Message Contest.

After tallying more than 5,000 votes for the 15 safety message finalists, the winning messages are:

DRIVE LIKE THE PERSON YOUR DOG THINKS YOU ARE

Both messages will appear on overhead highway signs Saturday, June 15, and Sunday, June 16. 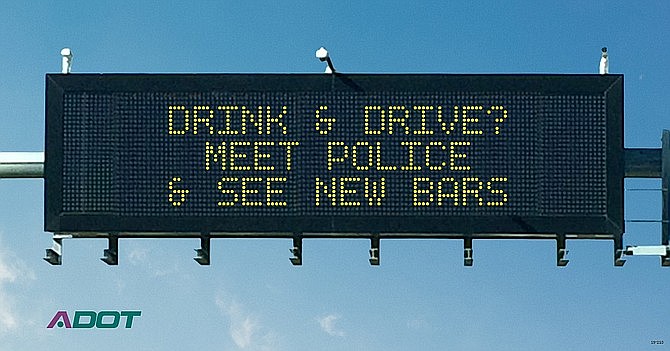 “These messages are wonderful and because the public invested their time into voting for their favorites, hopefully they carry a little more meaning and drivers will take the messages to heart when they see them this weekend over Arizona’s highways,” said ADOT Director John Halikowski. “Even as a cat owner, I can appreciate the sentiment of wanting to live up to being the people our pets believe us to be.”

Authors of the winning messages were invited to ADOT’s Traffic Operations Center where they had the opportunity to type their messages into the system and see them displayed on overhead messages boards. Mitzie Warner of Chandler submitted the “dog” message and David Posey of San Tan Valley contributed the “see new bars” message.

Warner said she was excited when she heard about the contest and admitted to “probably overthinking it” before coming up with a winning message.

“Dogs see the best in us,” Warner said. “If we all drove like the people they believe us to be – a little nicer, a little more courtesy – it’d be much better.”

Posey isn’t a stranger to safety. He’s worked in mining for two decades and said every meeting he’s been in has started off with a “safety share.”

“I just want everyone to know with all the options we have out there today, like Uber and Lyft,” Posey said. “There is no sense in risking hurting someone else or yourself.”

Displaying traffic safety messages on overhead signs is one way that ADOT and other traffic safety stakeholders in Arizona are trying to change driver behavior. According to the National Highway Traffic Safety Administration, more than 90% of vehicle collisions are caused by driver decisions, including choosing to speed, drive recklessly, distracted or impaired.

Information provided by the Arizona Department of Transportation.