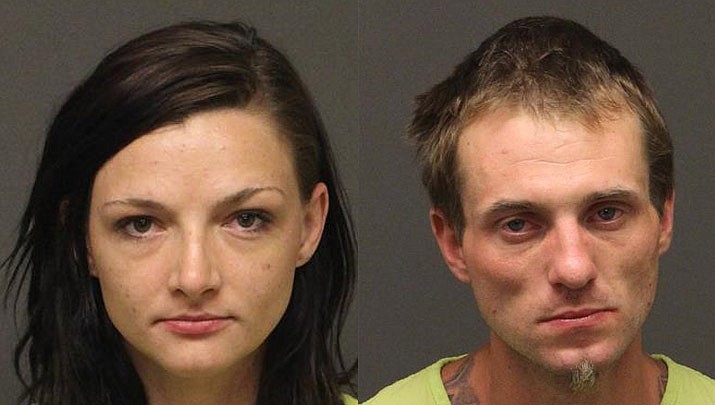 KINGMAN – Mohave County Sheriff’s officials say deputies went to the 2100 block of Devlin Avenue in reference to a wanted person and the situation quickly became an unlawful flight situation with damage to an MCSO squad car.

At approximately 1:30 p.m. Thursday, deputies responded to the residence and were advised a female, identified as Breeana Marie Alston, 28 of Kingman, had a felony probation warrant and was observed in a vehicle at the residence.

Deputies approached the vehicle and observed a male subject, identified as Joshua Thomas Gow, 27 of Kingman, in the driver’s seat and advised Gow to turn off the vehicle. Deputies saw Gow reach his hand to the floor board of the vehicle, so a deputy unholstered his weapon and gave commands for Gow to show his hands.

Gow placed the vehicle in reverse and backed away from the residence and allegedly hit the passenger side of the deputy’s vehicle. Gow then accelerated the car, heading west on Devlin Avenue. A pursuit ensued, during which Gow failed to stop for multiple posted stop signs and reached excessive speeds in attempt to flee, according to the MCSO statement.

Deputies advised they observed the vehicle in Walleck Ranch Estates on Gordon Drive. The vehicle came to a stop in the 2000 block of Rex Allen Drive and Alston exited the vehicle and fled on foot.

Deputies pursued Alston on foot and took her into custody.

The vehicle continued driving erratically and failing to stop at posted stop signs. Deputies observed the vehicle swerve and lose control, sliding into a dirt field north of Gordon Drive near Rainbow Street and Gow flee on foot.

Gow continued running toward nearby residences and deputies lost sight of him. A perimeter was established around the area, and a female subject arrived on scene stating she was a resident of one of the houses.

The female advised her children were inside and said their dogs were barking and acting aggressively in the backyard. She allowed deputies to enter the residence and Gow was seen exiting a large dog house in the yard. He was placed in restraints and detained.

Gow was arrested for criminal damage and unlawful flight from law enforcement, both felonies, and two active arrest warrants. Breeana Marie Alston was arrested for a felony probation violation warrant.

The damage caused to the deputy’s vehicle is estimated to cost approximately $2,500. The deputy involved was not injured during this incident. The investigation is ongoing.