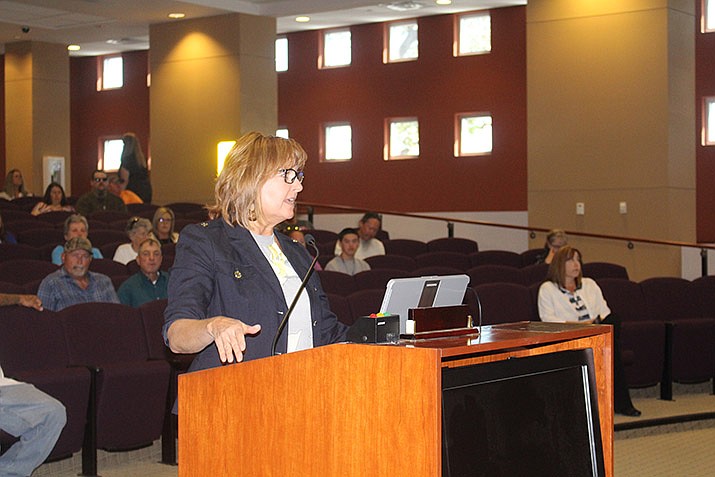 Rep. Regina Cobb (R-Kingman) in Kingman, June 3, 2019. Cobb is scheduled to explain the $20 million appropriation from the state for two interchanges east of Route 66 on Interstate 40 on Thursday, June 20, 2019. (Photo by Agata Popeda, Daily Miner)

KINGMAN – The City of Kingman will host a news conference with State Rep. Regina Cobb, R-Kingman, to discuss the appropriated $20 million by the state for two interchanges. The news conference will be held in the upstairs conference room at the Powerhouse Visitor’s Center, 120 W. Andy Devine Ave., at 5:30 p.m. Thursday, June 20.

For over 40 years, the Rancho Santa Fe interchange, also known as Rattlesnake Wash, has been identified as a critical transportation infrastructure needed to boost the economic vitality of northwest Arizona. The interchange and connector roads will connect Kingman’s Municipal Airport and Industrial Park to Interstate 40 and the future Interstate 11 commerce corridor.

Thanks to the Cobb’s advocacy in the legislature, and long-standing support of leaders in the City of Kingman and Mohave County, as well as Kingman and Mohave Manufacturing Association, WACOG and others, state leaders are recognizing Kingman as an important area for economic development.

The state’s appropriation provides a portion of the funding for the interchange. The City of Kingman is working with landowners on a public-private partnership that will address funding for the connector streets and utilities.

Before receiving the funds, the City must prove to the state it has the balance needed to complete the projects.

This money could also be including the Kingman Crossing project, as the legislation signed by Ducey stipulates two interchanges.