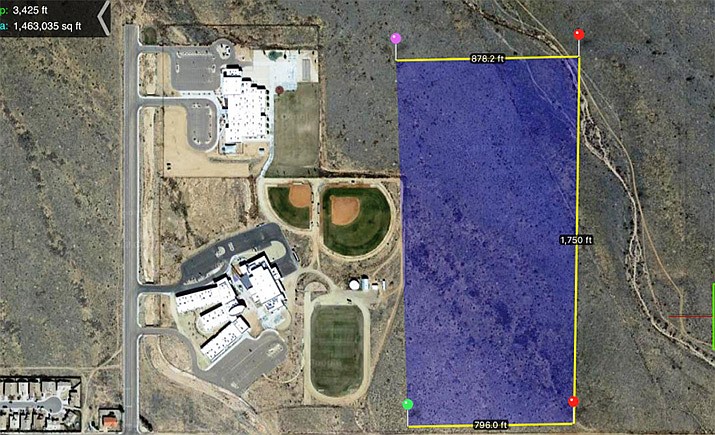 The City has budgeted $384,820 for Sunbelt Park, which includes soccer fields, basketball courts and much more. (City of Kingman courtesy image)

The work session begins at 5 p.m. in Council chambers, 310 N. Fourth St. Topics of discussion include “paying for City services associated with annexation,” the Beale Hotel and Americans with Disability Act requirements for businesses.

The majority of Tuesday’s business falls under the consent agenda. One item of significant interest is a zoning ordinance update and expansion of the Downtown Historic Overlay District contract with Lisa Wise Consulting. The scope of work for that update includes background review and technical analysis; public outreach; administrative drafts of updated standards; public review of the drafted ordinance; and public hearings and adoption. Cost to the City is a budgeted $200,000.

City Manager Ron Foggin could receive approval to execute the Arizona State Purchasing Cooperative Agreement, which allows Kingman to obtain materials and services under Arizona’s cooperative purchasing program at prices and terms laid out in contracts between the state and contractors. The City must renew the agreement every five years.

Council could also approve the purchase of a $126,720 crane for use by the Public Works Department. The department currently only has one crane from 1987 and it’s becoming increasingly difficult to maintain. The old unit would be sent to auction.

At a recent meeting Council decided to extend the commercial building fee waiver program until Sept. 30, 2019. That program could also expire if Council adopts a resolution that utilizes the program for a specific area of Kingman, like downtown. On Tuesday, Council will vote on the extension to Sept. 30.

There is only one item listed under new business, and that’s the Sunbelt Park master plan. The park is set to include four collegiate-Olympic soccer fields that will allow Kingman to host tournaments. The concept set to be considered by Council would have the park located by White Cliffs Middle School occupying approximately 24.44 acres. There will be a fire station on the west side of the property, volleyball and basketball courts. The City has budgeted $384,820 for the project.

During department reports, councilmembers will receive an overview of the Fire Explorer Academy, which comes through a partnership with the Kingman Fire Department and Western Arizona Vocational Education.