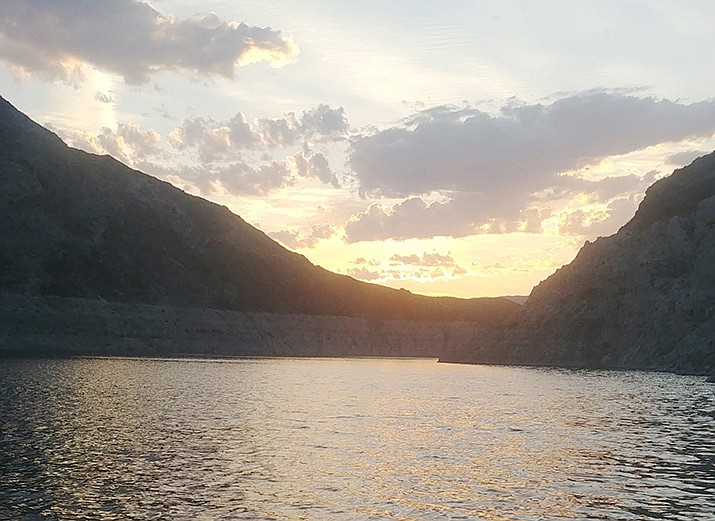 Those fishing in this weekend’s Stripe-R-Rama are hoping to see a beautiful sunrise Sunday. (Don Martin/For the Miner)

A lot of anglers, some from as far away as Idaho, are anxiously awaiting the start this weekend of Stripe-R-Rama 28, one of the largest and oldest overnight team-striper fishing tournaments held on Lake Mead.

Last Friday afternoon a group of anglers and Courtney Martzen, the tournament director for this year’s event, met at Lewis Kingman Park to draw launch positions for the tournament, which starts at 7 p.m. Saturday, June 22, 2019 out of South Cove. The event ends at 7 a.m. Sunday, with the weigh-in at Fisherman’s Landing in Meadview. The weigh-in starts at 8 a.m.

There were 28 two-person teams that signed up and paid their entry fees in the tournament, which is sponsored by local hotel/motel magnate John Patel, who has been the sole sponsor of this fishing tournament since its inception.

This year I noted that several past tournament favorites, including Fred Proudfoot and Ed Walker, were not entered in the event. Proudfoot and Walker have been the top team in this event for many years, but when I texted Proudfoot to ask him why they were not in the event he replied, “I’m not interested.”

That will no doubt leave the door open for Nevada Striper Club member Chris Madden, who now resides in Idaho, to repeat as champion of this overnight tournament.

Madden is seeking to repeat as a three-time champ, and this year he has enlisted the aid of another NSC member, Tom Lima, to help win the title. Lima is no stranger to the winner’s circle, having won the title of Stripe-R-Rama champ in the past.

Despite the fact Proudfoot and his relatives are not going to give Madden and Lima some competition, there is one team that stands out that has to be considered a tournament favorite.

Meadview residents Tim Flatt and Jack Ginkins are also not strangers to the winner’s circle when it comes to striper fishing tournaments on Lake Mead.

These anglers fish the lake out of South Cove a lot, and most recently took the top honors at the Kingman FireFighters Tournament.

Flatt and Ginkins also drew first-out on Saturday, while Madden/Lima will be the 20th boat out to start the tournament.

Smart money would say that if there is one team that could stop Madden/Loma from taking the top spot at this weekend’s tournament it may be them.

However, in looking over the teams that are already entered, there are a number of them that could be spoilers.

Last weekend, there were a number of teams on the water checking out their favorite fishing spots in preparation for the tournament.

Ryan Asplin and his uncle, Wayne Asplin, who are both entered into the event, were fishing in their “honey hole” in Virgin Canyon. Despite it being a full-moon night, they had a night to remember.

Between them they caught over 120 stripers, including the largest striper that I’ve weighed this year, a solid fish that pushed the scales to 3 1/4 pounds.

But that wasn’t all they had. I looked in their boat and they had a lot of fish that were 2 pounds or better. And that’s what it takes to get into the top tier of Stripe-R-Rama.

Even though I’m not going to fish in Stripe-R-Rama this year, (I’m helping Martzen with the tournament) I’ll get a couple of trips in before the event.

On Saturday night I had the opportunity to fish with four anglers from Florence. They had a trip I had donated to the Arizona Bowhunters Association. What started out to be a very tough night, ended, I think, on a high note.

If you’ve fished Lake Mead much, you know that stripers seem to always bite better when there is a little chop on the water. I’ve found over the years that a 6-10 mph wind seems to be best.

We started fishing at 9 p.m. and by midnight we had just seven channel cats on ice. There wasn’t any wind; it was dead calm.

Then at midnight the wind came up and it resulted in a wide open bite for stripers and channel cats.

What started out as a proverbial” hummer” turned out to be a good night of fishing. Our best striper weighed 2.54 pounds, and our best channel cat was 2 pounds, 11 ounces.

It took us about three hours to process all those fish, and the Johnson and Adkinson families will be eating striper and catfish for a long time.

Martzen said there is still time to enter into this fishing tournament. Entries will actually be taken right up to the start of the tournament Saturday at the South Cove launch ramp. The cost to enter is $75 and must be paid in cash.

Rules of the contest are very simple. Bring in your best 40 stripers and a big cat or carp for a chance to win a nice cash prize/trophy/plaque, or in the case of the catfish or carp, a Leatherman tool.

This year in addition to prizes being available for each team that weighs in fish, there will be a raffle table at the weigh-in. Sponsor John Patel has donated four two-night stays at his properties in Kingman; one two-night stay at his Flagstaff property and two two-night stays at his properties in Mesa/Chandler. There will be other fishing related items on the table as well. Tickets are $5 each or five for $20 and can be purchased on site. You do not have to be entered into Stripe-R-Rama to purchase raffle tickets.

I’ve got to tell you the trophies and plaques this year are going to be very special. The folks at Trophy Mart in Golden Valley have gone above and beyond to make this year’s trophy and plaques very special for the winning teams.