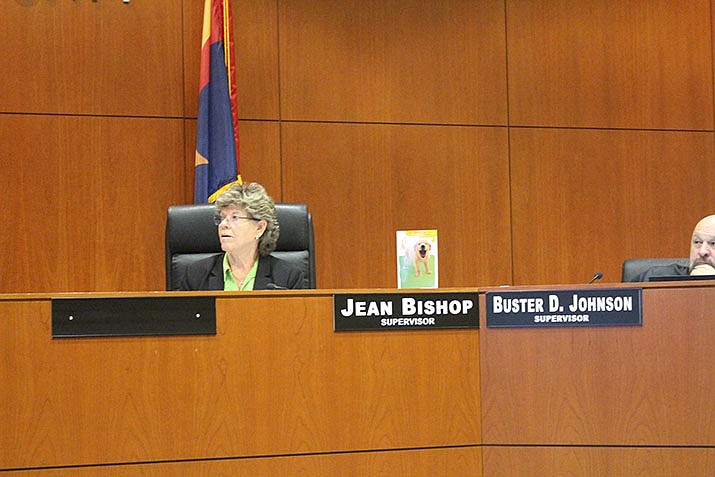 Supervisor Jean Bishop spoke again on behalf of building a new animal shelter in Kingman. In this photo, she is presenting a card she received from one of many residents who support the project. (Photo by Agata Popeda/Daily Miner)

KINGMAN – Love for animals brought nearly a full house to the Mohave County Board of Supervisors meeting on Monday, June 17. Supervisor Jean Bishop pressed with a motion for a new animal shelter in Kingman costing $2 million, and received support from Chairwoman Hildy Angius and Supervisor Gary Watson, along with the audience’s appreciation.

Even with the room full of residents insisting on building the shelter now when there are funds available, supervisors still couldn’t agree on what to do.

Supervisors Angius and Watson seemed keen to join Bishop under condition of dropping the price from the previously requested $3 million to $2 million. The confusion was increased by information that upon learning there was a possibility of getting a new county building, Western Arizona Humane Society, the current operator of the shelter, is not necessarily walking away from the table. That would suit Supervisor Buster Johnson, who wants a humane society, not the county, to run the project.

Supervisor Ron Gould was against the idea altogether, looking at how other counties addressed this issue and proposing to check with the electorate if they want to be taxed to build an animal shelter.

To increase his annoyance, Kingman Mayor Jen Miles came to speak to the board urging them to build a new facility. When Gould asked Kingman to participate financially in building the shelter, Miles said the City doesn’t have a surplus.

“Frankly, I find your argument rather weak,” Gould said to Miles. “Your argument is we’ve spent our money on other projects (…) so we don’t have the money to participate.”

Miles said that’s simply the fact and reminded him that the old animal shelter was built with money she and her family helped to raise. She promised she will come back to talk to the board on how Kingman can participate in the effort on an operational level.

County Manager Mike Hendrix confirmed he is able to deliver any shelter the board wants – for $1 million or for $3 million, sounding hopeful about the financial future of the county. He suggested the county can spend $2 million for the shelter and still finish the current work on the courthouse within the next two years.

After hours of discussion, the board approved the motion, even though Johnson and Gould voted against it. There are still many questions about the new shelter, for example its location.

Angius said there will be a special meeting devoted to the animal shelter only. It should take place at the end of the week and will be open to the public.