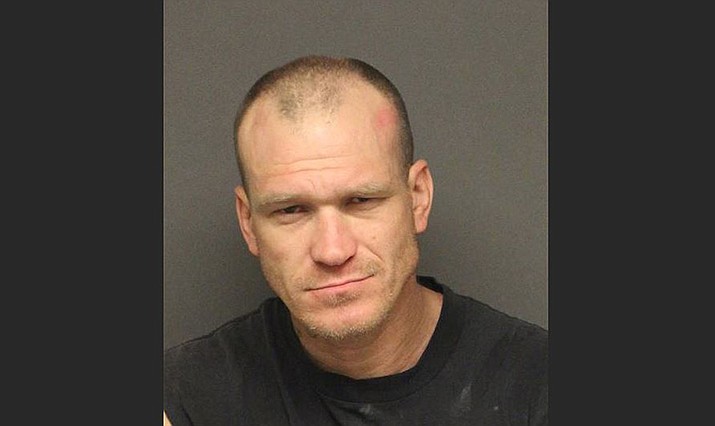 The state alleges that Joseph Lloyd Whybark is a repetitive offender with three prior felony convictions within the last 10 years. He could face more than 100 years in prison if convicted and his sentences run consecutively. (Photo courtesy of Mohave County Sheriff's Office)

KINGMAN – Joseph Lloyd Whybark, arrested in connection with a fatal hit and run vehicle collision that occurred April 23, was told Tuesday by Judge Derek Carlisle he could face more than 100 years in prison if convicted and his sentences run consecutively.

Deputies originally responded to the area of Colorado Road and Brooke Drive in Golden Valley on a call of a subject in the roadway. They arrived to find 62-year-old Krisandrea Pannell-Cashen of Bullhead City deceased. On April 24, the suspected vehicle involved was located abandoned in a wash on the west end of Golden Valley.

Whybark, 34 of Kingman, was charged by detectives Sunday, June 9, with leaving the scene of an accident causing death, failure to stay at the scene causing death and tampering with evidence, all felonies. He was also charged with a misdemeanor of driving with a suspended license.

Whybark was arraigned in Mohave County Superior Court the morning of Tuesday, June 18, where he pleaded not guilty to charges faced. He faces one count of failure to stop at the scene of an accident involving serious physical injury or death, a Class 2 felony. He faces a second count of tampering with physical evidence, a Class 6 felony.

Whybark faces multiple counts for another alleged offense for which he was also arraigned Tuesday. Those charges allege that on or about June 9, 2019, Whybark committed burglary in the second degree, a Class 3 felony, in the vicinity of 2600 Calle Marco Drive.

In addition to the alleged burglary in that case, Whybark faces a count of theft with value over $4,000, a Class 3 felony. The Mohave County Attorney’s Office charges that Whybark committed theft of building materials and tools in the vicinity of 2600 Calle Marco Drive. Whybark is also charged with criminal damage, a Class 5 felony, and misconduct involving weapons, a Class 4 felony.

That state alleges that Whybark is a repetitive offender with three prior felony convictions within the last 10 years. Judge Carlisle noted that with that addendum to the indictment Whybark could face a lengthy prison sentence if convicted.

“It looks like you would be looking at over 100 years in prison if you’re convicted and got a super-aggravated sentence and all of them ran consecutively,” the judge said.

A pretrial conference was set in Whybark’s cases for 11 a.m. July 15.