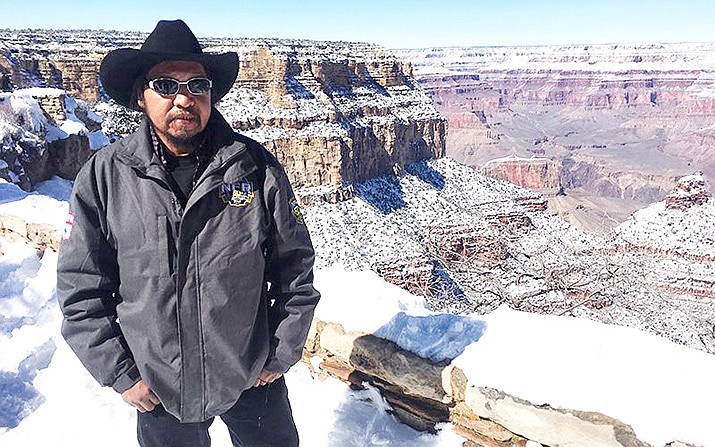 Havasupai Tribal Council Member Claudius Putesoy told Cronkite News in February that contaminated water affects his day-to-day life. “I’m a rancher and I hike a lot of cattle up here and it affects most of the water down there in Supai.” (Photo by Lillian Donahue / Cronkite News)

LAKE HAVASU CITY – Congressman Raul Grijalva, of Arizona’s 3rd Congressional District, has sought to end uranium mining near the Grand Canyon for more than a decade. With legislation introduced to Congress this year, he might just succeed.

Mohave County Supervisor Buster Johnson traveled to Washington D.C. earlier this month to testify in opposition to Grijalva’s bill, and the Mohave County Board of Supervisors on Monday unanimously voiced their opposition to HB 1373, also known as the Grand Canyon Centennial Protection Act.

The proposed law was most recently heard June 5 by the House Subcommittee on National Parks, Forests and Public Lands. It is scheduled for discussion at a formal hearing next week. If the bill is successful, it would withdraw more than 1 million acres of Arizona federal lands surrounding the Grand Canyon, including areas of Mohave County, from use by Arizona mining interests and make permanent a 20-year moratorium on uranium mining that was scheduled to end in 2032.

Mohave County and the Grand Canyon region are home to one of the largest known uranium deposits in the world, and according to Johnson, uranium mining could represent a $29 billion industry for the county.

Uranium mining in the Arizona strip hasn’t always been safe or responsible. According to the Environmental Protection Agency, mining companies extracted 4 million tons of uranium from Navajo Indian land from 1944 through 1986, which the U.S. Government bought for use in nuclear weapons. Since then, Navajo tribe members who worked in the region’s uranium mines have suffered fatal complications including kidney failure and cancer linked to uranium contamination, the EPA says, and has already contaminated soil, water, rocks and structures on the Navajo Nation.

According to a 2016 study by the Southwest Research Information Center, cancer rates among Navajo residents near former uranium mines doubled between the 1970s and 1990s.

This month, Johnson called HB 1373 an attempt to undo a 1984 compromise between environmentalists, mining companies and the U.S. government that would seek tighter regulation and mitigation of possible pollution from mining in the Grand Canyon region.

“I’ve testified in Washington on different uranium bills in the past,” Johnson said Tuesday. “In 1984, the U.S. Senate and Congress, and environmentalist groups agreed on the general use of public lands surrounding the Grand Canyon. About seven years ago, the region’s uranium deposits were worth about $29 billion, and there was no open pit mining. It was different in the 1940s and 1950s – the government ran mining, and there were no rules. They left a lot of uranium traces on native land, and it was a mess. Things are different now.”

According to Johnson, responsible mining of the region’s uranium wouldn’t affect water tables in the Colorado River region, which are often located about 900 feet beneath uranium mines themselves, and separated by a strata of impenetrable rock. The alternative to taking advantage of the region’s uranium deposits, Johnson says, would be a continued reliance on foreign sources of uranium.

“Uranium is a naturally-occurring resource on the Colorado River,” Johnson said. “About 80 percent of this country’s uranium is coming from overseas, and about 20 percent of electricity generated in the United States is nuclear … we can’t be that dependent on foreign resources. If we suddenly lost 20 percent of our power, we’d be in big trouble.”

Johnson this month submitted his own testimony to Congress, as well as that of former U.S. Bureau of Land Management officials, indicating that modern mining practices in the region would leave little room for threat to the surrounding environment, workers or local tribe members – in short, history would not repeat itself.

In 2016, Grijalva submitted a proposal to establish a Greater Grand Canyon Heritage National Monument, with more than 500,000 signatures urging former President Obama to protect the area as such. Obama chose instead to maintain the government’s 20-year moratorium on mining in the Grand Canyon region. This year’s Grand Canyon Centennial Protection Act would offer another avenue to permanently prohibit mining in areas near the Grand Canyon, and support for the bill continues into this legislative session.

“We are following in our ancestors’ footsteps to protect this canyon,” Havasupai Tribal Council member Carletta Tilousi said in a February news release. “Please stand with us. Today is a very important day, a historic day, as we continue to work together to stop uranium mining in the canyon forever.”

Johnson, however, remains confident that the region’s uranium mining industry and surrounding tribes can coexist.

“If I thought for even a second that uranium mining could harm our county or the Colorado River, I wouldn’t be for it,” Johnson said Tuesday.

Attempts to receive comment from U.S. Congressman Paul Gosar, who represents Mohave County, were unsuccessful as of Tuesday afternoon.