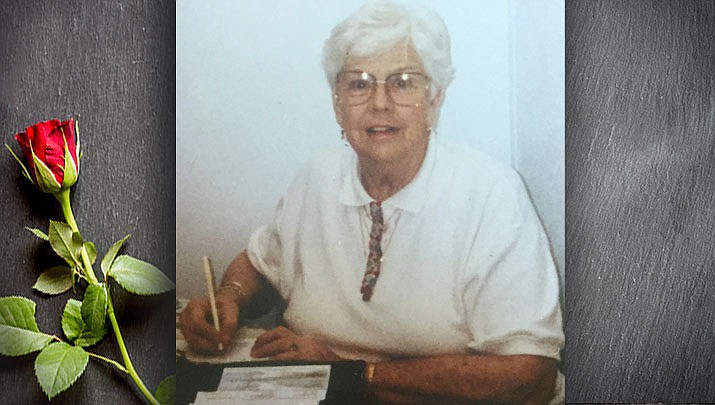 Billie Jean (Hopkins) Griffith passed peacefully June 16 at her home in Hope Haven Assisted Living, with her granddaughter, Janell Abraham, by her side.

Billie Jean, daughter of Herb and Rebecca (Pepper) Hopkins, was born in Davidson, Oklahoma on Dec. 18, 1925. The family moved to Kingman in 1936 when Billie Jean was 10. BJ graduated from Mohave County Union High School in 1943. She became the first Miss Mohave County in 1945. She met and married her decorated Army Air Force husband, Carl L. Griffith, on March 16, 1947. Together they had three children; Nancy, Carl Jr. (Bud), and Susie.

Billie Jean taught at the Jolly Day School for Mentally Retarded Children and worked on the Mohave County Fair Commission in the ‘60s. She clothed her children by working at J. C. Penney for many years. She also worked at the Feldspar Mine, the Mohave County Courthouse, ran a campground at Big Bear Lake, California in the 1980s and later worked for JoAnn Pope.

In 2018, Billie Jean received the Women Making History Award for her commitment to Mohave County and all that it entailed. Billie Jean was very devoted to the Democratic Party. Among family photos are BJ with Vice President Walter Mondale and an autographed picture of herself and Ted Kennedy. She spent a lot of time with Arizona Governor Rose Mofford. Senator Bob Stump had the U.S. Flag flown in Washington D. C. in honor of Billie Jean and Carl. She was also an active member of the Daughters of the Mohave County Pioneers and the Mohave County Cowbells.

BJ was a kind and generous to a fault, a lighthearted woman who loved life, her family and her beloved friends – too many to name. However, she had a special place in her heart for Clairann Cave, JoAnn Pope, Neda Cook and Mert Glancy. Billie Jean loved traveling to places like Panama Canal, and Alaska with Clairann, joined the Democratic Party and worked alongside JoAnn, cherished Neda and their sister time, and spent almost every morning for over 10 years with Mert discussing everything imaginable. BJ adored her two grandchildren, Janell and Darrin. Both came running when “Grammy” needed them.

Family and friends will have a gathering at a later date.