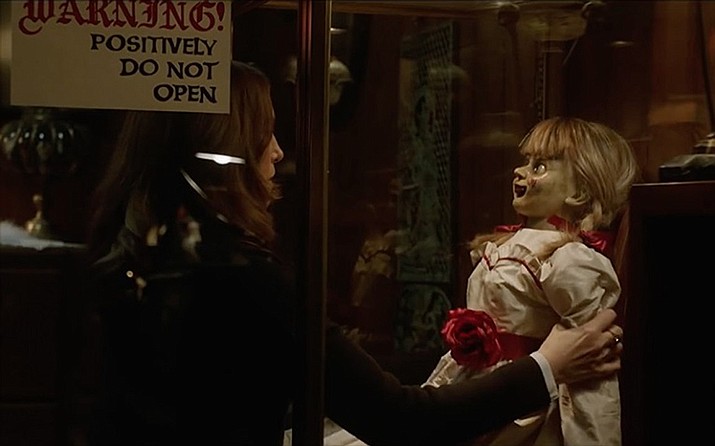 While babysitting the daughter of Ed and Lorraine Warren, a teenager and her friend unknowingly awaken an evil spirit trapped in a doll. (Warner Bros. Pictures)

Annabelle is back for her third romp at mayhem.

Horror Fans Lite – those who found Goosebumps and American Horror to be scary – this will have you squirming in your seat and clutching your friend's arm as full blown creepiness meddles with your soul.

Annabelle is supposedly a conduit for demons but she’s more like the madam to demons and ghosts that want to pimp your soul for their entertainment. She makes Chucky look like a Christmas elf.

For Horror Aficionados – those who aren't impressed with a film unless they leave possessed – you can pass on this mercurial, drawn out, boring and uninspired flip of the middle finger to common sense.

Rest their souls. America's favorite demon-hunter-witchologists are leaving on an overnight adventure in the timeline between "Annabelle" and "The Conjuring.” A bubbly, loving couple, they give their cute, blonde babysitter big smiles and hug their young daughter, Judy, before they leave. It’s a bright and pleasant scene as if they're off to go visit a relative and not vanquish evil in someone's home. While they are comfy fiddling with the cursed, they don’t seem to give the babysitter ample heads-up that their basement of haunted artifacts is eager to kill. Unfortunately, the Warrens aren't featured throughout the film, but it gives Judy time to develop her own demonological presence in the franchise.

Everyone has at least one person in their circle who doesn't know what's good for them and can't stay out of trouble. Rather than just ask the Warrens if they can summon her deceased father, the high-schooler breaks into their basement of misfit demon toys. With signs that say "Do Not Touch" prominently displayed, Daniela manages to nonchalantly touch every object in the room. Katie Sarife is a phenomenal actress and swivels easily between "oh crap, I released demons" and "my bad, I'm sorry I released demons.” In the end, she gets a lovely Brady Bunch lesson from Mrs. Warren: "You found out the hard way about … evil …" By "hard way,” she means possessed.

Real-life Judy Warren has said that real-life Annabelle is far scarier than her onscreen substitute. Caretaker to her parent's legacy and their Occult Museum in Connecticut, the writers took great creative liberty with her childhood. In the film, Judy has inherited her mom's sixth sense, which greatly reduced her popularity at school. Wielding a crucifix like a switchblade, she prays the maleficent back to the abyss. Veteran child star, McKenna Grace, is adept at handling terror from her stint on "The Haunting of Hill House" and guides her babysitter and Daniela through each demon's antics with confidence beyond her years.

Read more about Judy Warren’s actual life and how she met her husband here: https://bit.ly/2Lv1DoI.

Landing one of the crappiest babysitting gigs in history, Mary Ellen (Madison Iseman) follows all the rules and doesn't ask questions. She knows the Warrens have an occult holding in the basement, but she's willing to stay in her lane on the details. After a fog-hellhound attacks her boyfriend, ghosts ring the doorbell, and she is chased by the ancient Ferryman, Mary Ellen decides the best course of action is to stay in the house and run around. No escape to her own home or a neighbor’s home or even to the cops … she just stays put and is open to being terrorized.

Michael Burgess returns to the Conjuring Universe fresh from his creativity in filming “La Llorona.” Avoiding typical jump scares, Burgess uses visual slight-of-hand to reveal subtle elements like Annabelle sitting at a table when backs are turned or demons materializing from the slats of a rocking chair. Never cheap or tawdry, his illusions are respectful of the genre. If only the plots of these movies matched his mastery.

People who appreciate horror throwbacks and love the Conjuring Universe: 3 out of 5 haunted dolls

Horror Aficionados - 0 out of 5 demons