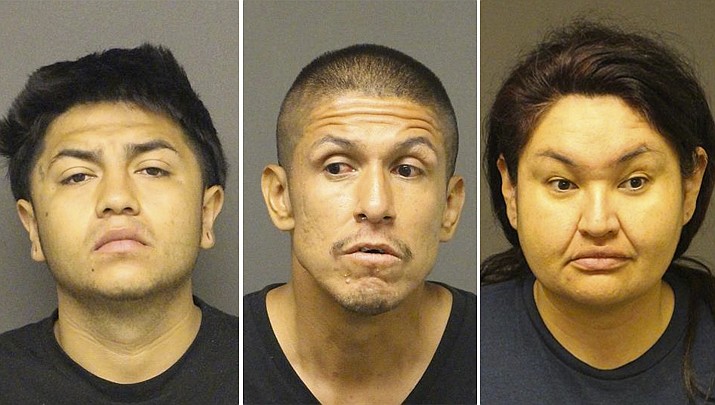 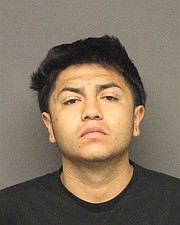 At 4:22 p.m. Wednesday, deputies responded to a shoplifting call at a business in the 10000 block of Highway 95. The reporting party said a male subject, later identified as Anderson, came into the business and took items without paying. Deputies were told that Anderson then left the business before entering the neighboring one.

The victim at the second business said Anderson placed a food order but then said he forgot his wallet and left. He later re-entered the business and tried to walk behind the counter, and at that time reportedly grabbed the tip jar and tried to leave. When confronted by employees, MCSO reports Anderson grabbed at something in his waistband, which led the employees to believe he had a weapon. Anderson then fled on foot. All victims gave a physical description matching Anderson.

Deputies passed a male subject on Vacation Drive matching the physical description while responding to the call. They made contact with Anderson, who was sitting on the front porch of a residence in the 1300 block of Vacation Drive. He gave deputies a false name, and a pat search revealed a medical marijuana card for an unknown male subject, a marijuana pipe, two cellphones, a money bag and several other items.

A pry bar was also removed from his waistband before he was detained and returned to the businesses to have the victims ID him. Anderson was positively identified by the victims.

Anderson was then removed from the patrol vehicle while waiting for a transport van. He is accused of again threatening the deputy, and at around that same time, provided law enforcement with his real name.

A records check revealed Anderson had active warrants. MCSO says he continued to act “belligerent” toward deputies and passing customers until he was transported from the property to the Mohave County jail.

Law enforcement also went to the address of the male subject listed on the medical marijuana card. He told deputies that he had returned home to find several items missing from his residence, including a TV which deputies saw Anderson carrying when they first made contact. The items listed as stolen reportedly matched the items found on Anderson. The items were returned to the victim. 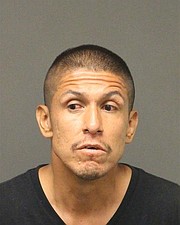 Mohave County Sheriff’s Office deputies arrested Augustine Gabriel Lewis, 39 of Fort Mohave, for armed robbery and dangerous drug possession, both felonies. At approximately 5:50 p.m. Tuesday, June 25, deputies responded to a business in the 4700 block of Highway 95 in reference to an armed robbery attempt.

A deputy in the area responded approximately five minutes after the call went out, and was advised upon entering the business that the man, armed with a knife, had seen the deputy approaching and ran out the opposite door.

The deputy exited the business and observed a male subject, later identified as Lewis, and noticed him to have his arms crossed over his chest with no clear visual of his hands. The deputy could however see the end of a chrome colored knife and drew his weapon. The deputy gave several verbal commands for Lewis to drop the knife but he refused.

Lewis finally dropped the knife and was told to get down on the ground after several verbal commands. The deputy placed Lewis in restraints and a pat search revealed 1.4 grams of methamphetamine in his pocket.

It was learned that Lewis entered the business and immediately began looking around in a nervous manner and pacing back and forth. Lewis then walked up to register counter and pulled out the knife.

An employee saw the knife and told Lewis to put it away, while another employee went to the back of the business to call police. The employee stated there were other patrons in the business at the time and felt she was in danger. 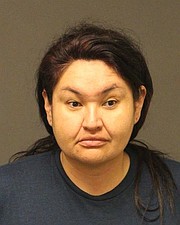 At approximately 1:55 p.m. Friday, June 21 deputies observed a red vehicle traveling north on Highway 91 near milepost 12, and observed the vehicle was traveling at a high rate of speed.

Deputies utilized their onboard radar detector and confirmed the speed of the vehicle was 74 mph in a posted 35 mph zone. Deputies made contact with the driver, identified as Isherwood, and asked for her required documents.

Isherwood handed deputies a state ID card, and when asked for her driver’s license, Isherwood advised she didn’t have one. A records check revealed Isherwood has a suspended license and two arrest warrants.

Kimberly Louise Isherwood was arrested and booked into Mesquite jail without incident.