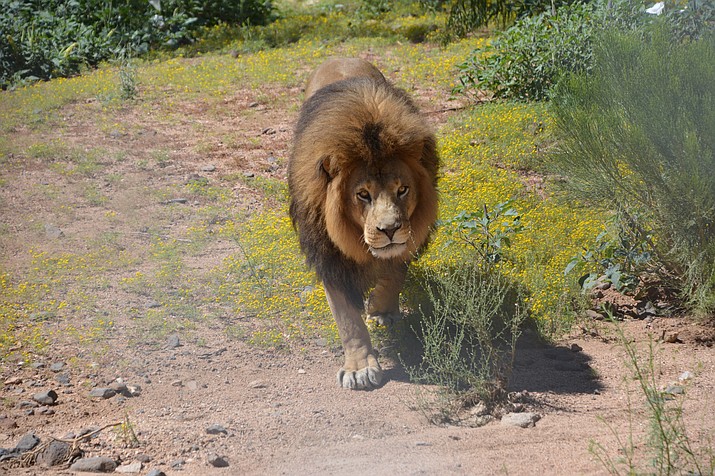 KINGMAN – The wild and exotic animal performance ban before Council at Tuesday’s meeting saw public comment both for and against the proposed ordinance, with community members on one side citing animal abuse, and on the other, a slippery slope should the ordinance be approved.

City Manager Ron Foggin began the conversation by speaking to the proclamation issued by Council around 18 months ago, which he said made a statement to the world and community that the City of Kingman doesn’t support the mistreatment of animals. With the circus coming to town later this month, Foggin said the City was asked to review its special event permitting process to see if the circus’ permit could be denied. Garden Bros Circus West will bring exotic animals to Kingman March 18.

“In looking at our permitting process, we just do not have the authority to do that,” Foggin said.

And so an ordinance was drafted. The ordinance defines exotic animals specifically, and excludes from the ban those normally associated with “rural agricultural activities” like horses, cattle, llamas and pigs. The ordinance would have no effect on service animals, and would not affect FFA 4-H, or other events sponsored by entities such as the Arizona Game and Fish Department.

Those who spoke in favor of the ordinance said the issue is not about rodeos or educational events, but rather circuses and exotic animals. Former councilwoman Vickie Kress spoke to that point.

“I appreciate that rodeos are vibrant, they are essential to our culture, to our region,” she said. “That’s not what we’re discussing here tonight.”

Patrick Rodgers, a board member at Keepers of the Wild, said that humans are bombarded with unnatural portrayals of exotic animals from birth.

“Tigers do not pose on pedestals on their hind legs or jump through hoops,” Rodgers said. “The behaviors we see in the circus are not natural to the animals at all. They’re forced behaviors that are taught to them from the time they were young. There are behavioral manipulations that have been learned through starvation, confliction of pain or injury, alienation from others, light deprivation and other repulsive forms of animal abuse.”

He said it’s all about profits.

“The only true reason for it is to line the pocket books of the companies, enslave the animals, depriving them from their homes, their families and their freedom, which is all any sentient being would like to have, human or animal,” he said.

Kingman resident Sarah Ferry, in speaking in favor of the ordinance, referenced the proclamation issued by Council more than a year ago.

Tim Woods, Mohave County Fairgrounds manager, gave his perspective from the other side of the argument.

Jonathan Kraft, founder and director of Keepers of the Wild, told Council some people don’t understand that the word "abuse" pertains to far more than food deprivation or the beating of animals. (Photo by Travis Rains/Daily Miner)

Those in favor of the ordinance had spoken about videos found on the internet showing mistreatment and abuse of exotic animals, specifically in regards to circuses. Woods addressed that as well.

“Ladies and gentlemen, on the internet you can watch a fellow burst into flames, beat up 1,000 bad guys, land on the ground and his hair isn’t singed,” he said. “So you can make anything look real on a video, especially on the internet.”

He also touched on the economic impacts of the proposed ordinance. He said “huge strides” have been made in bringing back pride to the fairgrounds.

“By passing this ordinance, you take away over half of the entertainment and educational things that come to the fairgrounds that rent the fairgrounds and also entertain the kids,” Woods said. “And so by doing that, that retards my ability to improve the fairgrounds.”

Jonathan Kraft, founder and director of Keepers of the Wild, was the night’s last speaker. He said some people don’t understand that the word “abuse” pertains to far more than food deprivation or the beating of animals. He said that when a person buys a dog or horse, those animals are taken for walks or put out to pasture, as opposed to being placed in a “little box” for 15 years.

“Wild animals don’t have that opportunity,” Kraft said, later adding that “this is the most horrific form of abuse imaginable.”

He told of a recent rescue of five bears that came from a facility in Texas. He said when transported, the bears lived in a 3-by-5 foot cage. When not being transported, he said four of the five bears occupied a single 12-by-12 cage with a concrete floor that was full of feces. The fifth, younger bear lived in its own 3-by-5 cage.

“That’s what they lived in for 28 years,” he said. “This is appalling, this can’t happen. I want to be proud of Kingman, I want it to set an example of not allowing this abuse to go on in our City.”

However, councilmembers voted to table the issue until the April 2 meeting. Mayor Jen Miles said Council needs time to consider public comment and information provided, and time Tuesday was limited.

“Secondly, there is an additional option for addressing this issue that has not yet been brought to Council, but will be ready to bring forth by next month,” the mayor said. “Mohave County is in the process of reworking its contract with the fairgrounds, and they have offered to work with the City to develop an administrative process in which the City can deny certain controversial events involving circuses, carnivals, etc., based on a set of criteria that will be developed.”

Council on April 2 could decide to go with the administrative agreement option or with the ordinance.

“However, the Council needs to consider any viable option to achieve the desired results,” Miles said.

City Council opposes mistreatment of animals, but doesn’t ban circuses
Council revisits exotic animal usage in circuses
The circus is coming to Kingman, but not everyone is excited
Miner Editorial | Circuses are a relic of the past, time to move forward
Letter | Danette Zachary: Council’s cowardice in the face of animal abuse allows cruelty