“When I saw the number, I thought ‘Oh my God! Somebody I know is in trouble,’” said Lucy, and it seems that this is exactly what the scammers want people to think.

For the first call, the scammers used a phone number belonging to the Clerk County’s Clerk Office. They told Lucy they were calling from the county’s jail and one of her grandsons is in trouble. She found that puzzling since she doesn’t have any grandchildren.

The second call came from “The Choice Community,” which The Daily Miner identified as a domestic non-profit corporation from Nevada that is no longer active. This time a scammer pretended to be Lucy’s grandson and even called her “Grandma.”

“I asked ‘Which grandson?’ and they hung up on me,” said Lucy, who recommends the same method to anyone who receives such a phone call. “Don’t say anything. Don’t say your name. Ask them which grandson are they.”

The Clark County’s Clerk Office is aware of the problem.

“This been going on for three or four months now,” said Assistant County Clerk Jim Pierce. “But this is happening to everyone these days when scammers can use whatever number they want.”

“The County can’t do much about it,” he added. For 100 phone calls they receive each day, three or four are come from people returning the “scam” call.

Elderly scams are nothing new in Arizona. 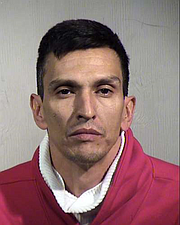 In late February, Donaldo Parra from Mesa was indicted by a state grand jury for fraudulent schemes and artifices and theft. An investigation started after employees of a bank noticed an elderly victim appearing nervous while withdrawing money from her bank account, according to the Arizona Attorney General’s Office.

Police learned the victim provided Parra with over $2 million over the period of two years. She believed the money was being used for a civil lawsuit against her car insurance company.