KUSD board members get advice from investment, political companies for bond process 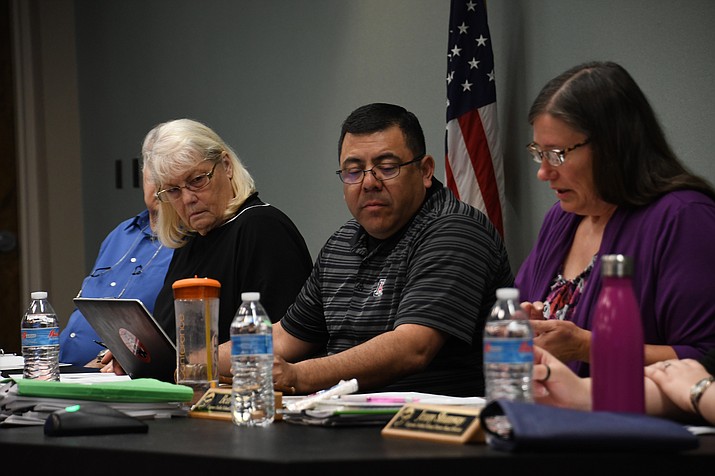 Kingman Unified School District School Board heard from consultant companies in regards to the process for the bond the district is looking to get for 2019 or 2020. (Photo by Vanessa Espinoza/Daily Miner)

The two consultants went over the bond options and how to campaign to the community with the board.

Once the school board picks which path it would like to take, Stifel will put together a voter pamphlet to provide information to voters about the election.

The school board now has to come up with a capital project list that will be taken care of with the bond.

“You have to put together a capital project list to show the voters exactly what your plans are, you know, if you have buses or refurbishing building or new construction. Whatever it is, you put that in there as well,” LaValle said.

Ulan from the political consulting company suggested to the board if members want to go through with the bond, 2019 would be a better year to put it up for election than 2020.

Now the board needs to look at who its voters are, which mostly consist of parents, staff and community. Ulan said the first two groups don’t count because most likely they will bring in 10-15 percent of the votes.

“It’s really important to go out and talk to other people and get their opinions,” Ulan said.

When it comes to the community, Ulan said it’s important to have people like the mayor, council and even the hospital CFO say how important the bond is to them.

Board President Charles Lucero brought up that many people are against the district going after the bond this time around, but last time they had no issues.

“The community was a huge help,” Lucero said.

Ulan told the board everyone needs to come together and be behind supporting the bond. Lucero mentioned that if the board does utilize a committee that could go around and educate the community on the bond issue, all board members must agree on the same issues.

“We need to make sure that we are all behind it and unified,” Lucero said.

Lucero said this time around there are employees and members of the district that aren’t sure if the board should go forward with the bond.

This time the bond would go toward refurbishing Palo Christi to be used as a development center for teaching programs, move the Little Explorers program and daycare center to Palo Christi. Plus, there are other things the board can decide to do with the bond.

Superintendent Roger Jacks said La Senita is in a good part of town, and that it would make sense to open it up as a fully functional school to spread out enrollment to other elementary schools.