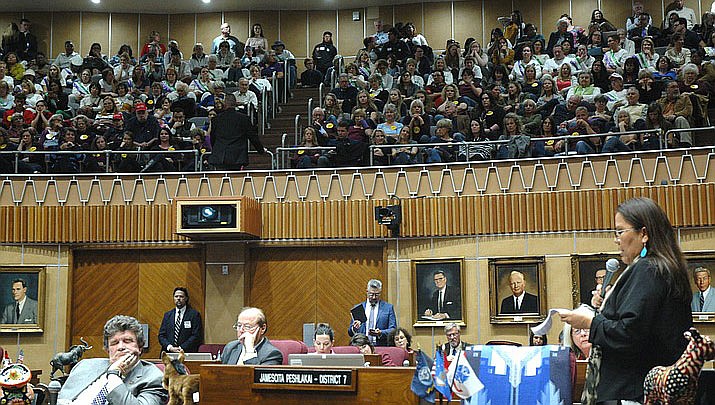 With a gallery packed with supporters and foes, Sen. Jamescita Peshlakai explains why she believes Arizona should ratify the Equal Rights Amendment. (Photo by Howard Fischer/Capitol Media Services)

PHOENIX – A bid to force a vote on having Arizona ratify the Equal Rights Amendment faltered Wednesday when every Republican senator present refused to allow it.

The 16-13 vote against suspending the rules to permit a vote came after even two Republicans who are cosponsors of SCR 1009 refused to side with the Democrats who sought an immediate vote; a third was absent. Their support would have provided the margin of support to require a vote.

One of them, Sen. Michelle Ugenti-Rita, R-Scottsdale said afterward she still supports the ERA. But she said that the motion by Senate Minority Leader David Bradley, D-Tucson, was to suspend the rules to force a vote. And Ugenti-Rita said she has to support her party when there is a vote on changing procedures.

For other Republicans, their vote to deny even debating the issue was strictly on philosophical and political lines.

Sen. Sylvia Allen, R-Snowflake, worried about the effects of a federal constitutional amendment that would say “equality of rights under the law shall not be denied or abridged by the United States or any state on account of sex.”

“‘Sex’ has a lot of different definitions today than it did in the 1970s,” she said, when the amendment was first proposed. And that, said Allen, would lead to “unintended consequences.’’

“It would be impossible for girls’ sports to keep boys out,’’ she said. “Already, transgender men are disrupting women’s sports.’’

Allen also said it would require things like mixing men and women in prison.

Sen. Eddie Farnsworth, R-Gilbert, argued the ERA would provide a constitutional basis to argue not only for abortion but to invalidate laws that prohibit the use of public funds to terminate a pregnancy.

But Sen. Victoria Steele, D-Tucson, said opposition is based on myths.

“The ERA is not about abortion,’’ she said. Steele said if that were true the original measure to try to get Arizona to ratify it in the 1970s would not have been backed by Sandra Day O’Connor, then a Republican state senator, and Claire Dunn, a Democrat nun from Tucson who was in the state House.

Farnsworth responded he has no way of knowing the motives of the pair.

Much of the more than an hour of debate turned on long-repeated claims on both sides.

“A basic principle of the American idea is majority rules,” said Sen. Andrea Dallesandro, D-Green Valley. And she said more than half of all citizens in Arizona and the United States are women.

“American women remain vastly underrepresented, underpaid and undervalued without the ratification of the ERA,” Dallesandro said.

But Sen. Sonny Borrelli, R-Lake Havasu City, said there already are federal and state laws to prevent employers from discriminating in pay discrimination based on gender.

“The wage gap is driven by choices men and women make,’’ he said.

“Women can work fewer hours than men,’’ Borrelli said. He also said there is “almost no gap’’ in wages when comparing single and childless women with what men earn.

“The wage gap cannot be explained away by choices,’’ she said. And Steele said she was not content to rely on statutes to protect women.

“Those rights are based on laws – laws that can and do disappear with every political election,’’ she said, with constitutional amendments needed to cement protections into place.

Sen. Sine Kerr, R-Buckeye, said the problems go beyond the 23 words in the amendment guaranteeing equality of rights. She pointed out that the proposed amendment also would give Congress the power to enforce it.

“It is wrong to abdicate our state’s rights to Congress,’’ she said.

Then there’s the legal question.

Congress approved the amendment in 1972, sending it to the states for ratification. Three-fourths of the states – a total of 38 – have to approve.

Nevada and Illinois have since done their own post-deadline ratifications. Proponents claim that would make Arizona the needed 38th state.

But it’s not that simple. Five states have voted to revoke their ratifications.

“The idea that a couple of states can tack on to votes taken over 40 years ago is a fraud and a cheat on our constitutional system,’’ said Allen.

None of that dissuaded Sen. Martin Quezada, D-Glendale. He said there are still legal questions about all that, noting that Congress could act now to extend the deadline.

Still, he said, it doesn’t matter to him even if an Arizona vote proves to be legally ineffective.

“There is no deadline on equality,’’ Quezada said. “We should still pass this because we care about equality.’’

All through the debate, male lawmakers on both sides mentioned their wives, mothers, sisters and daughters, each claiming that they were acting in their best interests.

“I believe that they should live in a world that recognizes them for who they are and accords them the same respect that is accorded to me,’’ said Sen. Lupe Contreras, D-Avondale.

“Women are sacred,’’ Farnsworth said, speaking of his wife and seven daughters. “I oppose the ERA because I believe that is the way to protect the women in my life.’’