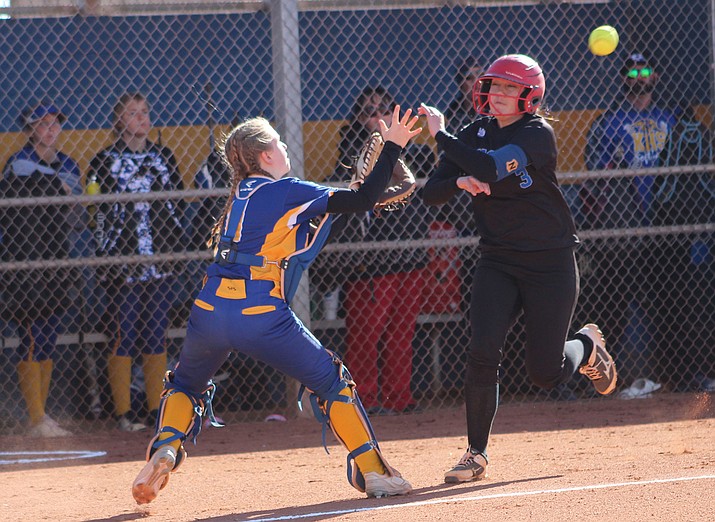 KINGMAN – There is a reason why you play the game.

On paper it appeared one squad had a considerable advantage Wednesday, but that wasn’t the case as the Kingman High School softball team itself in a hard-fought battle before picking up a 2-1 victory over Kingman Academy at KHS. 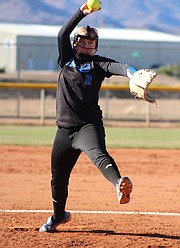 “(Academy) should be proud, they challenged us,” said Lady Bulldogs head coach Craig Lee. “They’re way better than what people tried to say they were. They have a really good team over there. They did a great job.”

And the final outcome could have easily gone in either team’s favor as Kingman scored the game-winning run on an error in the bottom of the fifth. Other than that, it was a closely-contested pitching duel after each squad scored in the first inning.

“I’m absolutely proud of my team,” Lee said. “We were outstanding defensively. Lilianna Valdivia pitched an excellent game. We gave up one run in the first inning and she shut them down the rest of the game.”

Valdivia picked up the win after yielding one run on five hits with four strikeouts and three walks in 6 1/3 innings of work. Maddy Chamberlain entered in relief and picked up the save after striking out one.

But the Lady Bulldogs’ pitching duo weren’t the only ones to excel in the circle as Kingman Academy’s Abbie Bean didn’t show any signs of her youth.

“Abbie is a phenomenal pitcher,” said Lady Tigers head coach Annette McCord. “She’s a freshman, so hopefully she keeps working at it. I think she can go places, she’s really good. She works, she practices and she does it.”

Bean even helped her own cause as her RBI single in the top of the first scored Gabi Lobue for an early 1-0 advantage. Academy almost pushed across another run in the top of the seventh inning, but a controversial call didn’t allow the Lady Tigers to knot the game at 2-2.

“I was a little bummed to see that call go the other way,” McCord said. “But he’s the umpire, you have to go with what he calls.”

The play in question featured Academy’s Ashlee Steele attempting to score on a wild pitch, but she and Kingman’s third baseman Ariana McKowan got tangled up. Steele jumped to her feet after the scuffle and tried to reach home, but was tagged out and then the Lady Tigers struck out for the final out of the game.

“Our third baseman was making a play on the ball,” Lee said. “She has every right to make a play for the ball. So I wasn’t worried about the call at all.”

Nevertheless, Academy still showed a lot of heart with a starting lineup that featured zero seniors, two juniors and four freshman against a Lady Bulldogs squad with a strong core of upperclassmen.

“I was super proud of my girls,” McCord said. “They did a great job. I have a lot of freshman on this team. Our freshman pitcher did phenomenal against some seasoned hitters.”

The Lady Tigers will join Kingman and Lee Williams at Centennial Park Friday for the Coca-Cola Classic. The Lady Bulldogs open pool play against Parker at 4 p.m., while Academy is also in action against Tuba City and the Lady Vols face off with Window Rock. Bracket play kicks off at 10 a.m. Saturday.