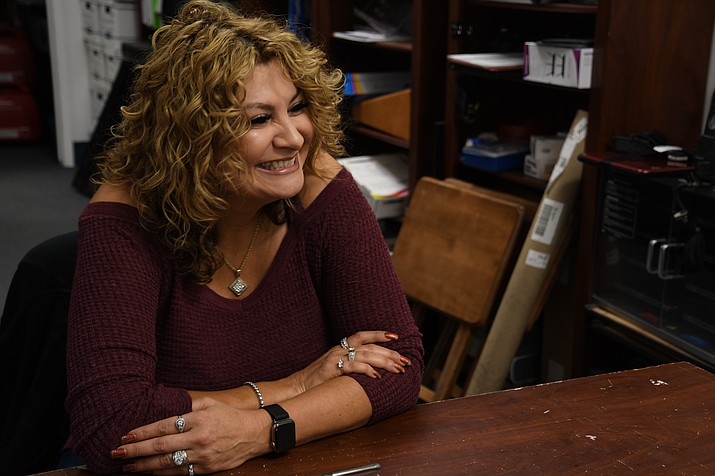 Rosalba Homer and her eldest son stand behind the gun counter at Pawn World, 201 Beale St. Homer said her family has always supported her as she opened her own business. (Photos by Vanessa Espinoza/Daily Miner)

She was 8-years-old when she started her first job as a cowboy hats saleswoman.

Rosalba Homer has spent most of her life since then in the retail business. For 23 years she has owned and operated Pawn World.

Homer was raised by a single mother who often attended swap meets in Chino and Colton, California. That was where she started selling cowboy hats.

“I also sold hermit crabs,” Homer said with a smile. “Those were my favorite.”

She said she would sell hermit crabs, aquariums and extra shells out of the stand.

“Owning your own business is tough,” Homer said. “It takes research and funding. It’s tough – but it is rewarding.”

Managing everything has been the most difficult part for Homer. Hiring and firing employees, setting schedules, paperwork, bills, all of it.

“Wearing all the hats, that’s the most challenging,” Homer said.

As long as people put in the work, a small business can truly thrive in Kingman, she said. And she said she would rather see more small, family-owned business than corporate ones in town anyway.

While making schedules can be difficult, making her own schedule and being her own boss is a very rewarding part of owning a business.

“I never had to miss any of my children’s functions,” Homer said.

Family is very important to Homer.

“Without my family, I wouldn’t have been able to do it,” Homer said.

Homer’s family rallied behind her and were always very supportive of her choice to own her own business. Her great-grandmother would watch the children when Homer and her husband couldn’t, they helped set up a back room for the kids when they were little and everyone helped. 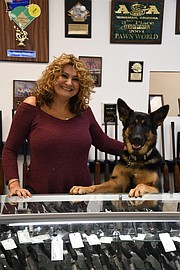 Homer stands with the 16-month old German Shepherd that can be seen in the store on Beale Street. (Photo by Vanessa Espinoza/Daily Miner)

The business has been such a big part of the family that Homer’s eldest son has wanted to be a pawn broker since he was in middle school.

“I love that,” Homer said. “We have the family life as well. We were able to coach, go to games.”

And Homer and the employees of Pawn World have done more to be a part of the community than just coach sports teams. They are big proponents of giving back to the community. Donating time and money to children’s clubs and community organizations.

“Being able to help in the community is the most rewarding,” Homer said. “We’ve all been somewhere when we needed a little extra help. It’s good to see the community and be out in there.”

Homer’s advice to young women, and anyone, who is interested in opening a business is that knowledge is power.

“Know everything,” Homer said. “And never stop learning. Push through that feeling of being scared and amazing things will happen.

“Take that risk, and don’t doubt yourself.”