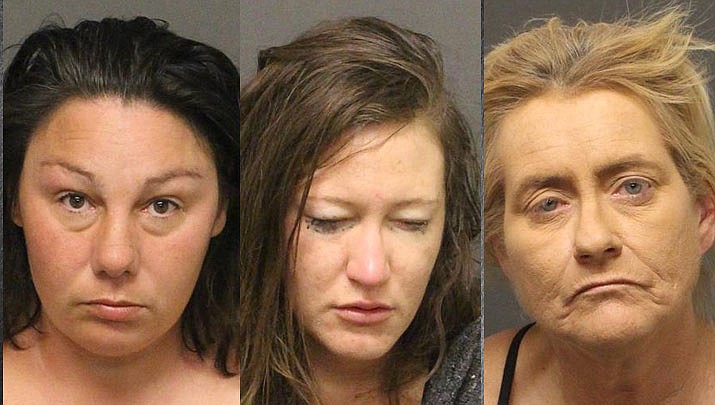 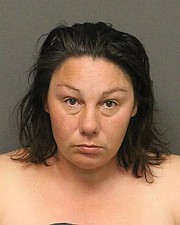 At approximately 4:45 p.m. Tuesday, deputies responded to a business in the 3200 block of Highway 95 in reference to a suspicious call.

The reporting party advised a female subject was in the business demanding they call law enforcement because she needed to speak to law enforcement for a reason that she refused to tell them.

Deputies arrived and contacted the female subject, later identified as Riggs. She refused to speak to deputies about what was going on and refused to give deputies her name.

Riggs stated that she needed to go to the hospital, but later refused when deputies offered to call medical to have her transported to a hospital. Riggs then became hostile and attempted to punch the deputy in the chest.

Riggs was placed in restrains and continued being aggressive by kicking the deputy in the knee. Riggs then attempted to spit on and bite the deputy and responding Lieutenant.

When medical arrived, she was hostile toward them and refused evaluation. Riggs stated that she had been drinking alcohol throughout the day.

Deputies placed Riggs in a patrol vehicle for transport to a nearby hospital. During transport, Riggs damaged the backseat area of the vehicle by kicking the roof and damaging the air vents and dome light.

While waiting for a jail transport van, Riggs again kicked the responding Lieutenant in the leg.

Layla Chylene Riggs was arrested and booked into Mohave County Adult Detention Facility on the above charges.

Mohave County Sheriff Office deputies observed a vehicle fail to use its turn signal while changing lanes on Highway 95, which led to the occupants being arrested for drug possession.

Kesterson attempted to give a fake name, but was identified by a responding deputy who knew her from previous contacts.

Both subjects were transported to Valley View Medical Center for treatment of a possible overdose. While admitted, hospital staff discovered 1.6 grams of heroin and drug paraphernalia in Kesterson’s clothes.

Once discharged from medical care both subjects were transported to Mohave County Adult Detention Facility without incident. 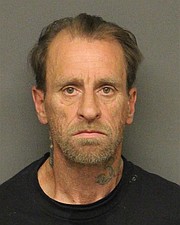 The deputy drew his weapon and ordered the male subject the stop and show his hands, the subject complied. The male subject was identified as Grensavitch and he was detained.

A pat search revealed a baggie containing 0.48 grams of methamphetamine in his pants pocket. A search of the vehicle revealed a pipe and two baggies containing a white crystal residue. 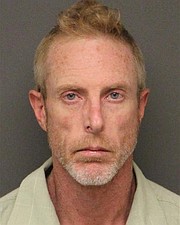 Deputies conducted a traffic stop and made contact with the driver and the front seat passenger, who was identified as Beach. A records check of both subjects returned with an active arrest warrant for Beach and he was detained.

A pat search revealed 1.7 grams of methamphetamine in Beach’s pants pocket. A further search of the vehicle revealed drug paraphernalia in the driver’s purse.

The driver was issued a citation for misdemeanor drug paraphernalia possession and a repair order for the license plate light and was released from the scene. 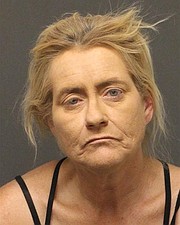 At approximately 1:30 p.m. Tuesday, March 5, deputies responded to a business in the 5200 block of Highway 95 in reference to a shoplifting.

Loss prevention staff advised deputies they had observed a female subject, later identified as Valders, attempting to exit the store past all points of sale with a cart full of items.

When confronted by staff, the female stated she did not pay for the items and left the scene on foot. The items in the cart totaled approximately $591.

On Thursday, March 7, deputies were contacted by a store employee advising they saw the female subject standing outside a business in the 4700 block of Highway 95.

Deputies responded and made contact with the female and identified her as Valders. A pat search revealed a relative’s checkbook with signatures, several cards belonging to the family member and a fake driver’s license.