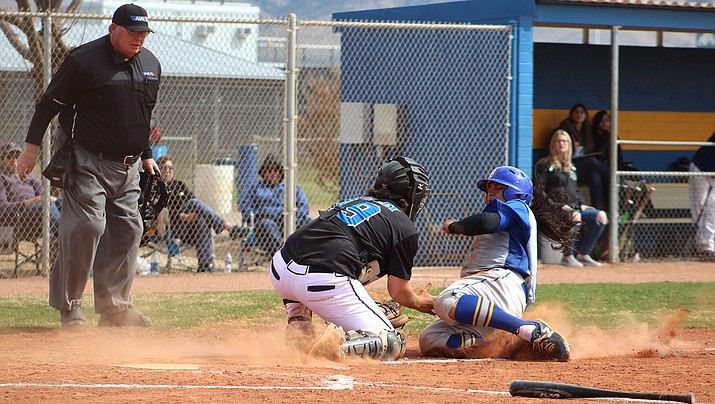 Kingman Academy's Ryan Hurley tags out Kingman's Dante Bravo at home during Game 1 of a doubleheader Thursday at KHS. Hurley later hit a two-run homer to lead the Tigers to an 8-2 win, but the Bulldogs answered back in the nightcap with a 10-7 victory. (Photo by Beau Bearden/Daily Miner)

KINGMAN – The timing could not have been better for Ryan Hurley.

The junior stepped up to the plate with his squad trailing by a run and he quickly changed that with a two-run homer that propelled the Kingman Academy High School baseball team to an 8-2 victory over Kingman High in Game 1 of a doubleheader Thursday at KHS. 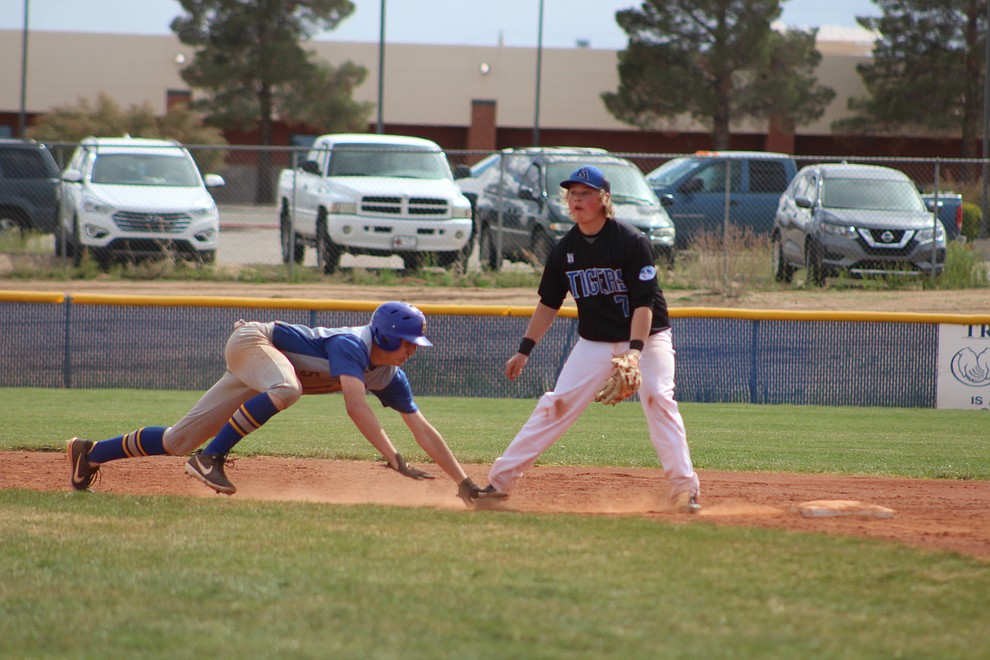 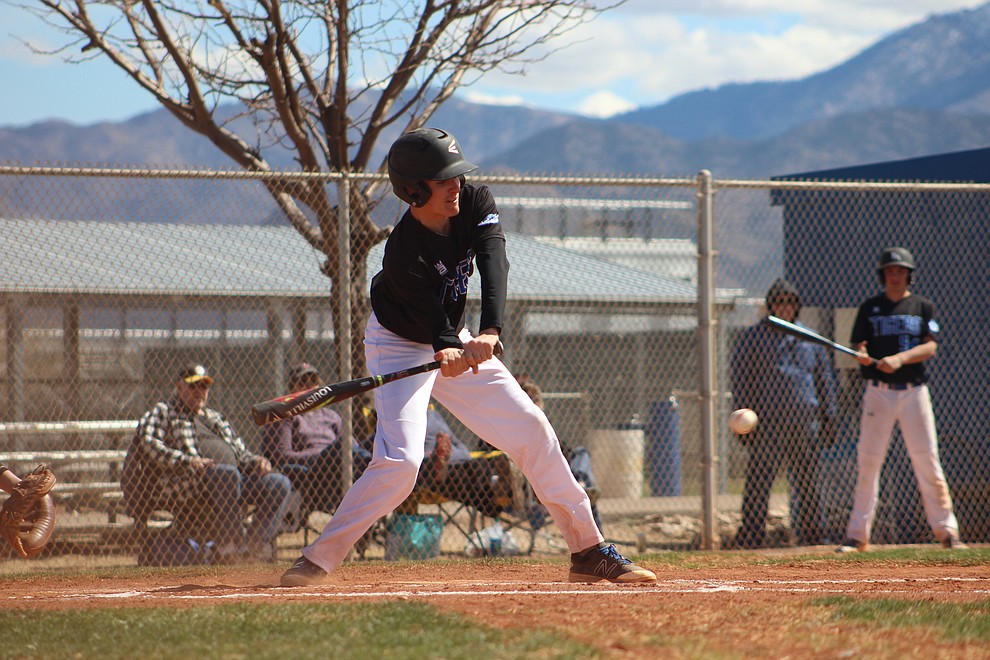 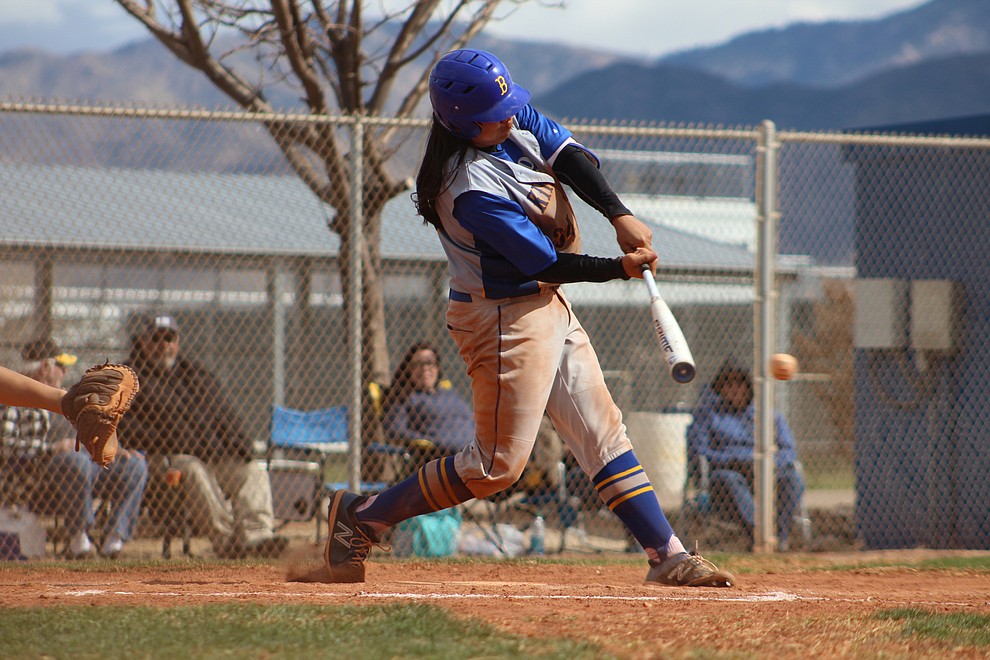 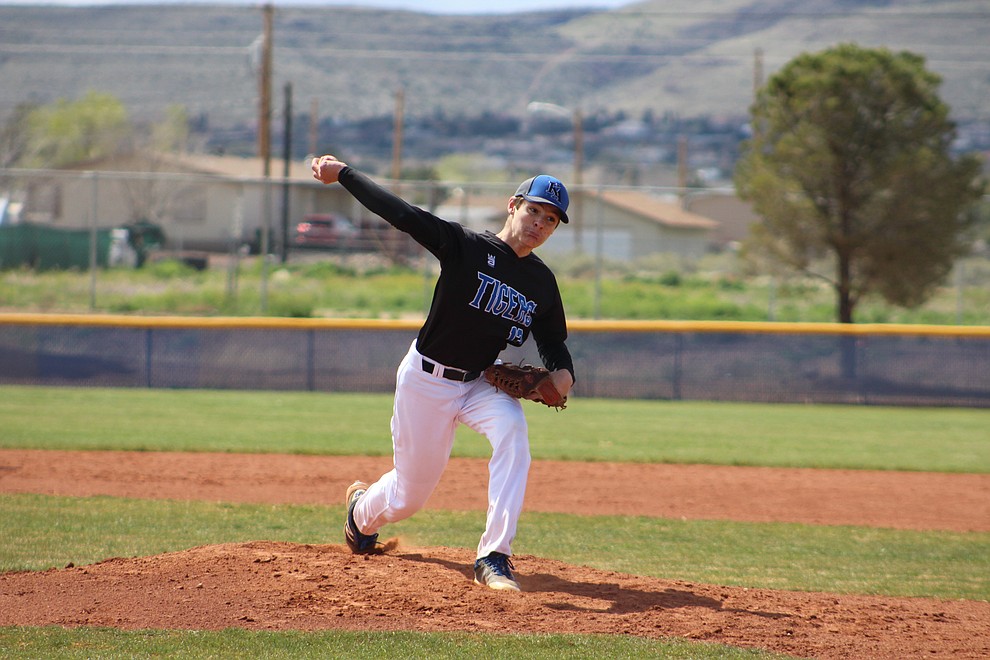 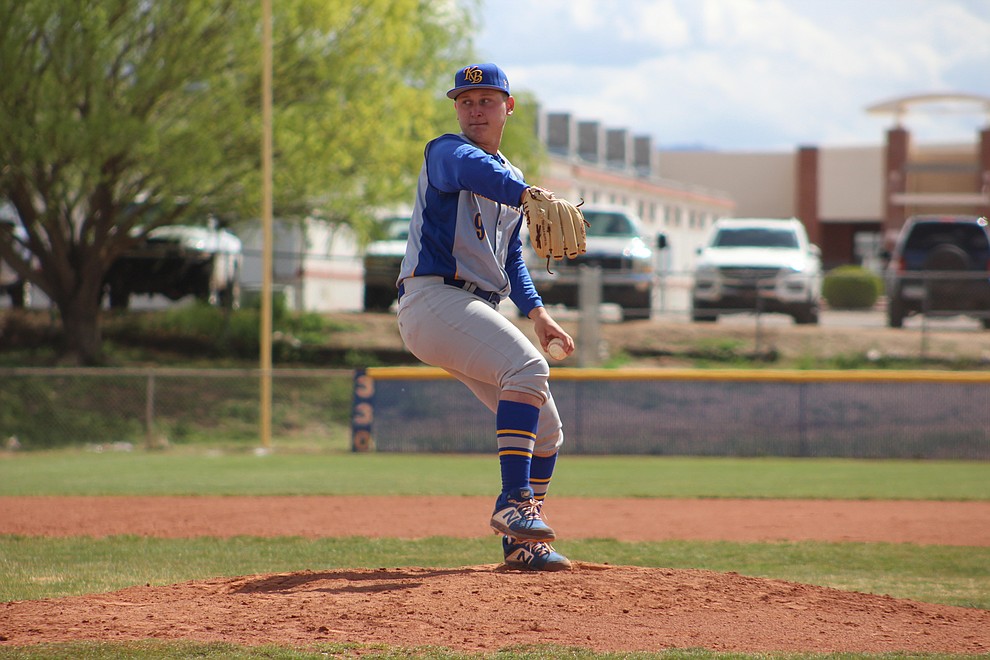 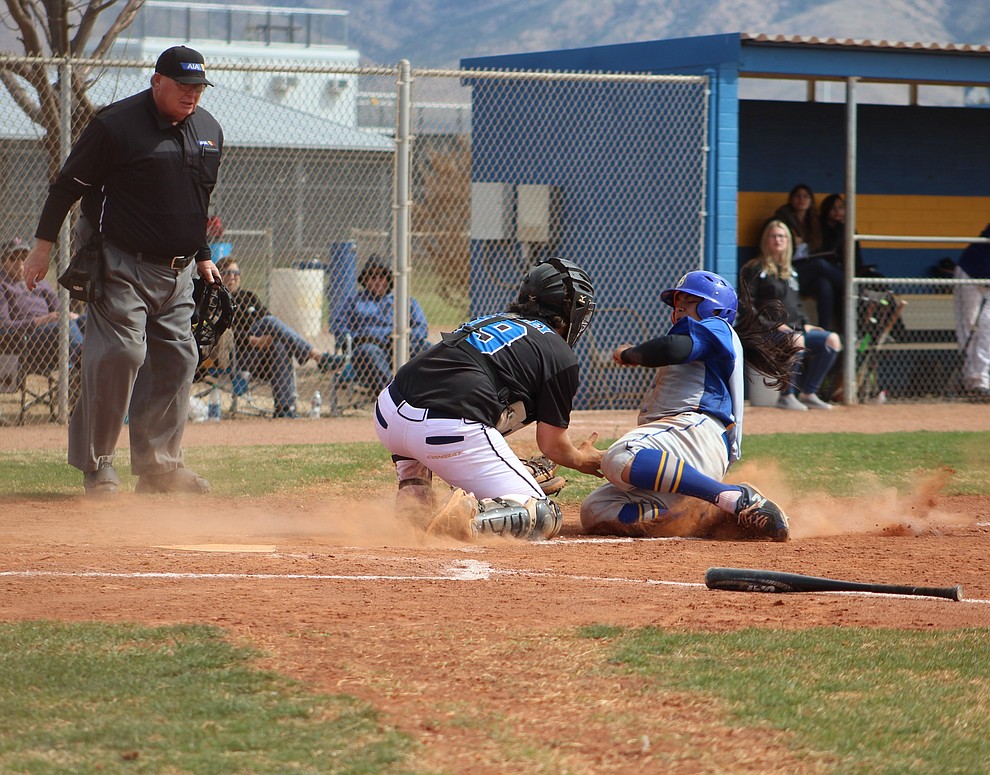 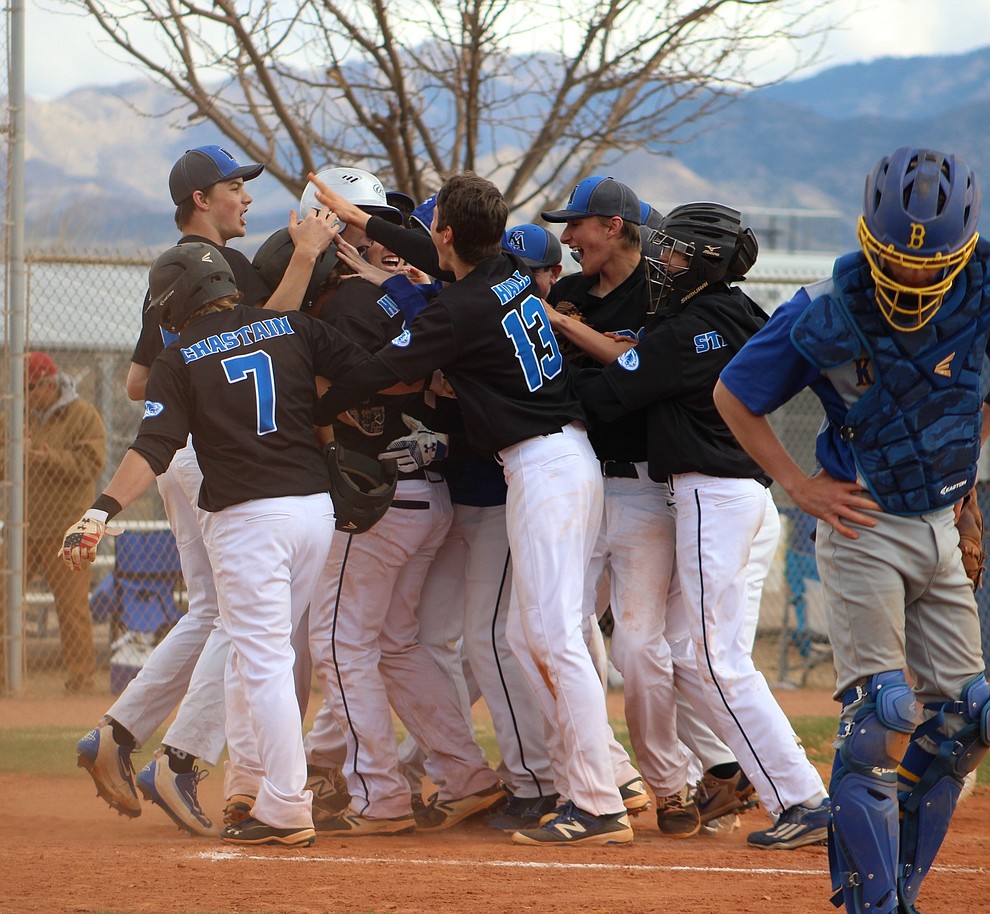 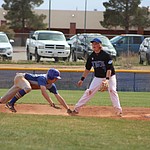 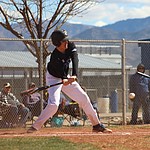 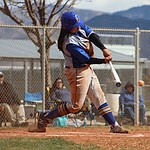 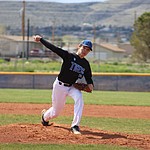 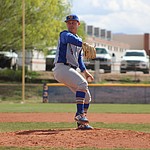 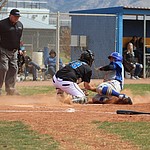 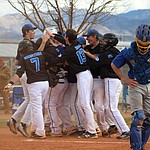 “Honestly I thought it was a hit into the gap,” Hurley said. “But rounding first I saw the outfielder at the fence. The ball just kept going.”

And it also helped that the wind decided to die down just long enough for Hurley’s shot to sail over the fence and give the Tigers a 3-2 lead in the top of sixth inning that they would never surrender.

“You could just hear the knock – it had the velocity,” said Academy head coach Bill McCord. “It was pretty sweet and very clutch.”

The Tigers kept it rolling in the seventh by tacking on five more runs and chasing Kingman’s Rilee Araya from the mound.

Araya was cruising through the lineup before Hurley’s homer and a tough seventh inning.

Nonetheless, the senior was dealt the loss after yielding five earned runs on seven hits with 12 strikeouts and two walks in 6 1/3 innings of work.

“It was huge to get those timely hits off of him,” Hurley said of Araya.

Hurley also admitted Araya and the rest of Kingman’s pitching staff is probably the best they’ll face in the 3A West Region.

So it was a much-needed boost for the Tigers to find success and tally their second region win of the season.

“The home run was definitely a spark plug for the rest of the lineup,” McCord said. “We needed that – we haven’t had that in a while. It was very good.”

Hurley led the way with two hits and four RBI, while Adam Chastain also had two hits and Kaden Bean added a two-run triple to round out the top performers.

The Tigers carried that success over to the defense and it proved to keep Kingman in check for most of the contest.

“We played way better defensively than we played against Parker with nine errors,” McCord said.

It was a different story in Game 2 as the Bulldogs used a seven-run third inning to take the nightcap of the doubleheader 10-7.

TJ Harviston led Kingman with a 2-for-4 performance along with a RBI and two runs scored. Dante Bravo picked up the win after allowing two earned runs on five hits with eight strikeouts and five walks in 4 1/3 innings of work.

Academy didn't help its cause by committing nine errors in the game, but did tack on a run in the sixth and two runs in the seventh to make it interesting.