The debate over an ‘official’ state drink reaches the senate 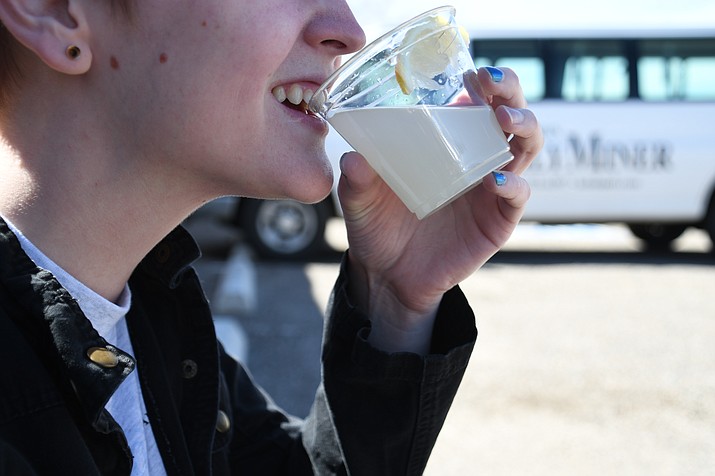 Garrett Glover of Gilbert is hoping to convince members of the Senate Government Committee on Monday to add lemonade to the list off items that are considered to be “official’’ representatives of Arizona. (Photo by Vanessa Espinoza/Daily Miner)

Colors – Blue and old gold, with blue the same as U.S. flag

Flower – The white waxy flower of the saguaro (cereus giganteus)

PHOENIX – A bid by a Gilbert teen to have lawmakers officially recognize lemonade as the state drink may be hijacked by some legislative adults.

Garrett Glover hopes to convince members of the Senate Government Committee on Monday to add lemonade to the list off items that are considered to be “official’’ representatives of Arizona. That list ranges from copper as the state metal to the Colt single-action revolver as the state firearm.

Glover pointed out that Arizona is known for “the five C’s,’’ specifically cattle, copper, climate, cotton – and citrus. Yet there was nothing official to represent that.

And the reason Glover chose lemonade, he said, was because Florida already had laid claim to orange juice.

But HB 2692, which cleared the state House last month on a 57-3 vote, is getting more turbulence in the Senate where it now needs approval of the Government Committee.

Sen. Victoria Steele, D-Tucson, wants margarita as the official state drink when the measure comes up for a hearing Monday.

And Sen. Juan Mendez, D-Tempe, who was born in Arizona, has his own idea.

More than two dozen states already have an official state drink. So Glover thought it was time to add Arizona to the list.

“No other state has lemonade as their state drink,’’ he said.

But is it truly representative of Arizona?

The U.S. Department of Agriculture, it its most recent report, said Arizona has 7,300 acres of lemons planted, producing about a million boxes. But that pales against California where 21,200 boxes came off 47,000 acres.

Then there’s the question of what do people think of Arizonans drinking.

Glover dismissed the idea of choosing tequila, which actually was proposed by Rep. Noel Campbell, R-Prescott, when the measure was approved by the House. Campbell, who voted against the bill, said that would be “in the spirit of the cultural diversity of this state.’’

“Yes, that might be a good choice,’’ Glover conceded. But there’s a drawback.

“It’s not something that every single Arizona resident could enjoy,’’ Glover said, what with the law making it off-limits to all younger than 21.

That’s not a problem with what Mendez proposes: Jamaica tea.

It’s pronounced ha-MAI-ca. And it’s essentially a herbal tea made from hisbiscus flowers.

So he’s offering that as an alternative.

Mendez said he’s not trying to undermine the essence of what Glover is doing. In fact, the senator said he always had assumed Arizona did have an official state drink and said the Gilbert teen has the right idea – if not the right drink.

And Mendez said it’s far better than what the majority of other states have picked: milk.

“I supposed it’s because of the milk lobby,’’ he said.

The three Democrats aren’t the only ones who want to tinker with what Glover has proposed.

Sen. David Farnsworth, R-Mesa, has proposed his own amendment. It would keep the idea of lemonade as the state drink, only it would have to be pink lemonade.