Kingman won’t give up on Rancho Santa Fe interchange 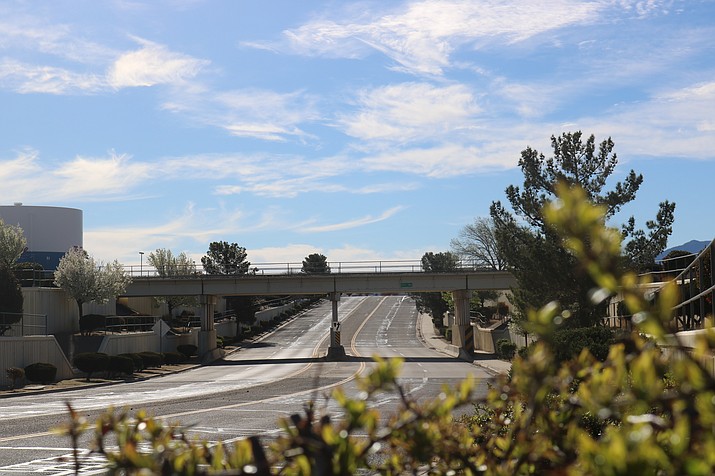 The one entrance into the Kingman Airport and Industrial Park gives industry pause when looking to locate in Kingman, an issue that would be addressed by the Rancho Santa Fe traffic interchange. (Photo by Travis Rains/Daily Miner)

If you ask local officials and industries at the Kingman Industrial Park, the Rancho Santa Fe traffic interchange is of vital importance to the City’s future and growth. So why is it that the project is having so much trouble coming to fruition?

A timeline for the interchange was recently provided in a City of Kingman press release. It stated the need for an additional roadway connection to the Kingman Airport, which would come with the construction of the interchange, was originally identified back in 1971.

“The need is even greater for the interchange now because our airport and industrial park are such excellent economic drivers, but site selectors now look at it and say you don’t have a second ingress or egress into this area,” explained Mayor Jen Miles. “And that is a huge safety concern for site selectors.”

Since then, the decades have seen various points in time where the project looked to be on the cusp of becoming reality, only to fall by the wayside time after time. In 2008, the Arizona Department of Transportation funded $1.73 million for a consultant to prepare 95 percent design plans and specifications for the interchange. At that time, ADOT was going to fund 70 percent of the project and the City 30 percent. But then came the Great Recession. 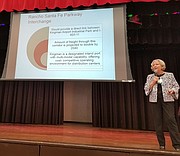 Mayor Jen Miles, then vice mayor, presented to the Arizona Association for Economic Development Transportation Symposium about the importance of the Rancho Santa Fe traffic interchange back in March 2018. (Photo by Tom Carter/Courtesy)

“What happened was the Great Recession, among other things, and the City was not able to come to the table with what was needed at the time, so the project went on hold,” the mayor said.

Recovering from the Great Recession is an ongoing process, Miles noted.

“I think the Great Recession has had a significant impact on our ability to get it on,” Miles said of the interchange and the five-year construction plan. “Sometimes it takes time for a critical mass of people to all come together on the same type of vision and goal. And in this case, it did take some time.”

In 2018-2019, the City funded $1.4 million for design plans and right of way acquisition for the project. City Engineer Greg Henry says that as long as some construction begins within 7 years, that plan will not need to be updated. 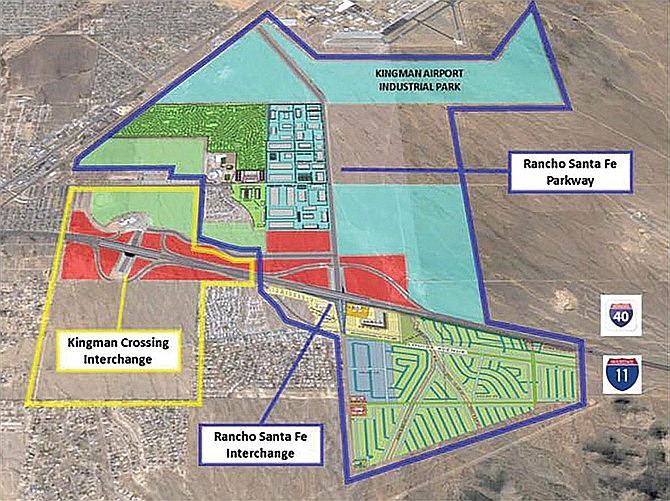 The City of Kingman isn’t the only entity struggling when it comes to funding. Miles said ADOT has funding concerns, too, and that the department’s priority is currently maintenance rather than expansion.

And so it’s happened again, as the Arizona Department of Transportation did not include the project on its five-year construction plan. The City was asking for a $20 million contribution from ADOT for the $44 million interchange project. However, that doesn’t mean the City is giving up.

“Never, never, never give up, that’s what Churchill said, and that’s our position, too,” the mayor said.

So the City of Kingman will continue to push for the project in a few different ways. City representatives intend on going to the April 12 public comment hearing on the tentative five-year plan in Phoenix. The City also continues to meet with stakeholders and landowners in an effort to create a development agreement for the area of the proposed interchange. Something that may not seem related but is, Miles said, is how the City will address the “fiscal damage” done by the passage of Proposition 413, which repealed the 1 percent increase to the transaction privilege tax.

“That has not been mentioned, yet I can’t help but wonder if it had an impact. But that is not something they have specifically said,” the mayor said when asked if ADOT cited the tax repeal as a reason for why Rancho wasn’t included in the plan. “They do like full partnerships and they like the communities to come in and do their part fiscally. Yes, this made it much more difficult for the City to carry that part.”

She said at the end of the day, the City “must have” revenues to fix roads and address capital projects. That’s why the mayor expects there to be some kind of ballot measure addressing that funding for the 2020 general election.

“In the end, I think people in the community are recognizing that we really want our roads fixed and we really want positive investment in capital projects in our community,” Miles said. “That’s my hope.”

While the City is continuing its efforts to bring about the Rancho Santa Fe traffic interchange, the mayor noted the community can play a part, too.

“I think the community has the opportunity to just support this project with their advocacy, help the City in its advocacy and also really consider and participate in decisions going forward about how we create revenues to create the future we want,” Miles said.