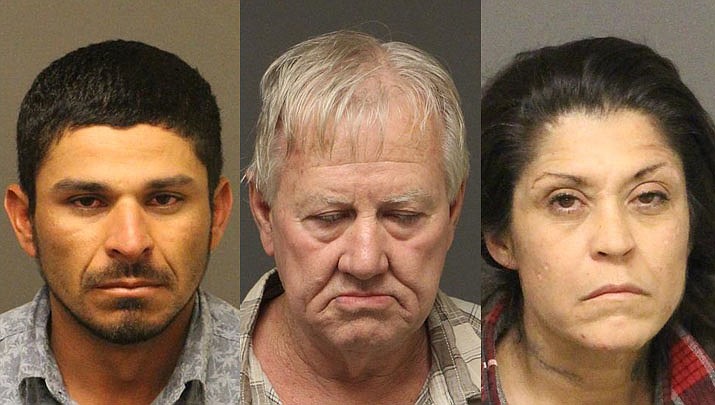 At approximately 6:15 p.m. Sunday, March 17 deputies observed a black truck turning onto Pierce Ferry Road from Highway 93. The truck was towing a flatbed style trailer, which deputies noticed the trailer didn’t have a visible license plate.

Deputies conducted a traffic stop and made contact with the driver, identified as Barragan, and his juvenile son. Barragan claimed the license plate for the trailer was at a property a short drive away and deputies followed him to the property.

During the drive, deputies conducted a records check of the truck and discovered the license plate displayed was reported stolen out of Las Vegas. Upon arrival at the property, deputies placed Barragan in restraints and placed him in their vehicle.

A records check of the truck’s VIN also came back stolen out of Las Vegas. A search of the vehicle revealed a handgun and two small baggies containing methamphetamine.

Another vehicle on the property, which Barragan claimed was his, had a license plate that also was reported stolen out of Las Vegas. Detectives responded to the scene and a search warrant was drafted for the property.

Another flatbed style trailer was located on the property and a records check revealed it was also stolen. The juvenile’s mother was called and responded to meet deputies to take custody of the juvenile.

Javier Barragan was arrested and booked into Mohave County Adult Detention Facility without incident. This investigation is ongoing.

Deputies conducted a traffic stop in the 4400 block of Highway 95, and the driver, identified as Hanke, admitted to deputies that the registration was expired, he did not have his driver’s license on him, and the vehicle didn’t have current insurance.

Deputies observed a white crystal substance in Hanke’s lap. When deputies asked, Hanke told deputies it was bread crumbs. A K9 was requested, K9 Doc gave a positive alert for the presence of illegal drugs inside the vehicle.

A search of the vehicle was conducted and deputies located a small ring-sized box with a white residue. More of the white crystal substance was observed on the floor and driver’s seat, which tested positive for methamphetamine.

Drug paraphernalia was also located inside the vehicle. Based on the state in which the substance was located, it appeared to deputies that Hanke dumped the substance from the small box when stopped.

Monday deputies responded to a business in the 2900 block of John L. Avenue in reference to a fraudulent incident. The reporting party advised he was going through the checks the business received and observed a check with his daughter’s name on it.

His daughter advised she didn’t write a check to the business. The reporting party was also contact by the bank and advised two other checks had bounced.

The reporting party advised he spoke to the employee who runs the weekly bingo game and remembered who gave the checks, but didn’t know a last name or contact information for the subject.

Deputies received copies of the checks and observed they all appeared to be from the same account and in almost sequential order. Deputies also observed there was personal information on all three checks, but none of them matched.

Friday deputies were called by the reporting party, who advised the subject who issued the check was currently at the business. Deputies made contact with the subject, who was identified as Trujillo.

A records check revealed an active arrest warrant and Trujillo was taken into custody. Trujillo admitted to deputies to issuing a bad check for that day’s bingo game.

Gina Clarissa Trujillo was arrested and booked into Mohave County Adult Detention Facility without incident. Deputies later discovered that Trujillo was responsible for another fraud that occurred on February 6.

The victim in this case advised deputies that Trujillo had given her a check for over $3,000 and asked her to deposit the check, since Trujillo didn’t have a bank account.

The victim deposited the check, withdrew money from her account and gave it to Trujillo. The victim was later contacted by the bank and advised her account was over drafted, and the check she deposited was not a real check.