Booker’s 59 points not enough as Suns fall to Jazz 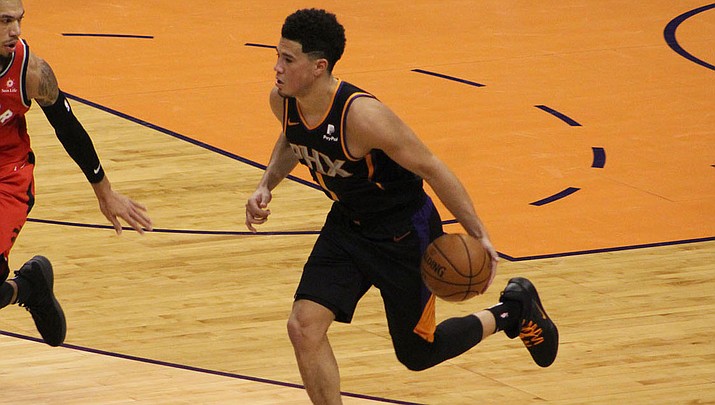 Devin Booker put on a show Monday night, but the Suns couldn’t pick up the win in a 125-92 loss to the Utah Jazz. (Daily Miner file photo)

SALT LAKE CITY (AP) – Devin Booker scored from all over the court. Rudy Gobert and a host of Utah Jazz players did their damage from much closer to the rim.

Gobert dunked his way to a season-high 27 points and set the single-season NBA dunk record to fuel Utah to a 125-92 victory Monday night over the Phoenix Suns, who got 59 points from Booker.

Booker topped the Vivint Arena record of 51 points by Karl Malone on Dec. 9, 1995, and his previous season high of 55, set in December in a triple-overtime loss to Washington. The fourth-year guard made five 3-pointers and shot 19 for 34 despite drawing several double-teams as the Jazz sought to prevent him from reaching 60 points. He also made 16 of 17 free throws.

"I had it rolling a little bit today, so we kept playing through me," Booker said, but later added in a broad understatement: "We're still struggling on the defensive end."

Booker was the only Suns player in double figures. He joined David Robinson and Kobe Bryant as the only players in NBA history to score 50 or more points in a game in which none of his teammates score more than 10, according to Elias.

Derrick Favors and Ricky Rubio each had 18 points and Joe Ingles added 14 as the Jazz won for the seventh time in their last eight games.

"We're an unselfish team. We move the ball. We share the ball and we play together," Ingles said as the Jazz had 31 assists and shot 55.8 percent from the field. "We've never worried about someone shooting too much or not enough."

Gobert's alley-oop off a lob from Donovan Mitchell in the second quarter was his 270th dunk of the season. The 7-foot-1 center's 275 dunks are the most in the NBA since the statistic started being tracked in 2000, besting Dwight Howard's 269 slams in 2007-08.

After the game, Rubio joked that Gobert can quit complaining they don't get him the ball enough.

Gobert had six dunks in the game — he missed a no-look reverse attempt in the third period — and averages 3.7 per contest. Milwaukee's Giannis Antetokounmpo had 262 dunks entering the night.

"They have to pick their poison," Gobert said about recent opponents who have concentrated on jamming him on the pick-and-roll. "It's fun to win and it's fun to get dunks. It's fun to get 3s too, but it's all about sharing the ball."

Booker's shotmaking had the Suns only down 14 entering the final quarter, but Utah's dunk-fest continued, even though Gobert was on the bench. Favors had two jams around a rare dunk by Ingles and the Jazz cruised from there.

Still, some of the loudest cheers of the night were for a Suns player. Jimmer Fredette, the Naismith Award winner at nearby BYU, went 1 for 10 for six points in 14 minutes in his second game back in the NBA after completing his season in China, saying afterward he was pretty amped up.

"I expected some of that, but that was amazing. It just shows the passion of the fans in Utah," Mitchell said. "I watched him growing up and it's pretty special to come back home and have that feeling."

After a tight first quarter, the Jazz scored 14 unanswered points, capped by Mitchell's 3-pointer, to open a 40-23 lead in the second quarter. Booker scored 18 second-quarter points but the balanced Jazz outscored Phoenix 36-22 in the period to take a 62-43 halftime advantage.

The Jazz had the most difficult schedule in the NBA at one point but are now capitalizing on facing a host of teams outside the playoff race. This win was the first game of a four-game homestand against teams well below the .500 mark.

The Suns have lost six of seven and four in a row.

Beyond Booker, the Suns were missing most of their firepower due to injury. T.J. Warren (18.0 points), Kelly Oubre Jr. (15.2), Josh Jackson (11.0) and Tyler Johnson (10.9) forced some players to be more aggressive offensively and Booker to carry a heavy load despite a lot of defensive attention.

"We tried to make it as difficult as possible but when (Booker) is hitting fadeaways on the baseline when he is falling out of bounds, it comes to a point where you got to just tip your hat," Mitchell said.

Suns: Richaun Holmes got two quick technical fouls and was ejected after getting whistled for a rebound foul just before halftime. ... The Suns didn't run a complicated offensive system as they mostly screened for and passed to Booker but still committed 22 turnovers. ... Booker set the Suns single-season mark with 13 games of more than 35 points.