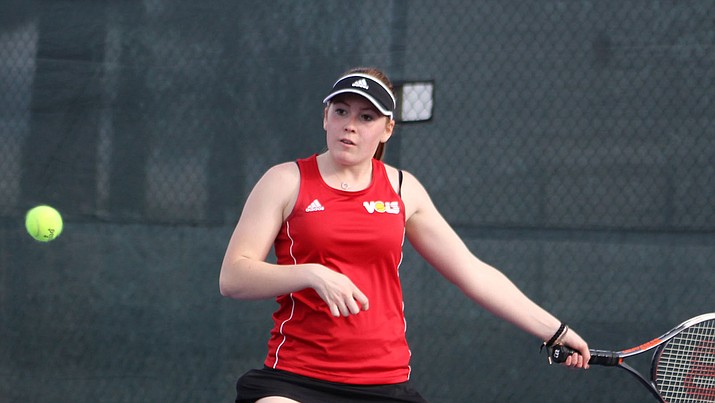 Lee Williams junior Amber Tefft notched a 6-0, 6-4 win over Estrella Foothills’ Miranda Livingston at No. 6 singles, but it wasn’t enough as the Lady Vols dropped their first match of the season. (Photo by Beau Bearden/Daily Miner)

KINGMAN – It is never easy to lose, especially when the setback comes after seven straight wins.

“They’re a pretty good team,” Lady Vols junior Amber Tefft said of the Lady Wolves. “It’s nice to play against people that are good – it’s worth the challenge. We’ll get better.”

Lee Williams has already proven it has the talent to succeed as the 7-0 mark to start the season is the best in program history.

But the Lady Vols’ winning streak came to an end against their first section opponent and it also snapped a run of six straight sweeps.

It wasn’t for lack of trying though as Lee Williams gave Estrella Foothills (4-3, 1-0 Division II Section III) all it could handle.

The Lady Vols tallied their first win of the match at No. 3 doubles when Gabriela Villar/Arden Schickner bested the duo of Nicole O’Brien/Miranda Livingston. Lee Williams could have taken a 2-1 advantage in the match, but Macie Wilson/Paige Cody dropped a close 8-6 setback at No. 1 doubles.

Lee Williams was trailing 2-1 entering singles play and unfortunately dropped matches at Nos. 4-5 before Tefft defeated Livingston 6-0, 6-4 to give the Lady Vols a fighting chance with a 4-2 deficit.

But the loss was clinched when Wilson fell 6-4, 6-4 at No. 1 singles against Hannah Archer.

At Estrella Foothills, the Vols kept their winning streak alive Tuesday as they picked up a 6-3 victory over the Wolves (2-6, 0-1 Division II Section III).

At Chino Valley, the Tigers had little issue Tuesday afternoon as they cruised to their third region win of the year in a 9-3 victory over the No. 15 ranked Cougars (5-3, 0-3 3A West Region).

Joey Sanfilippo led the offense with a 3-for-4 performance, highlighted by two RBIs and a run scored.

Ryan Hurley and Bridger Bodily each drove in two runs as Academy racked up eight hits.

Wyatt Hall picked up the win after yielding one earned run on three hits with six strikeouts and no walks in four innings of work.

The Tigers pounced early for two runs in the second and added two more in the fourth and four in the fifth.

At Northwest Christian, it was a good start for the Bulldogs Tuesday as they scored two runs in the first inning, but it wasn’t enough in an 8-3 setback to the No. 14 ranked Crusaders (7-2, 1-1 3A West Region).

Kingman jumped out quickly for a 2-1 advantage after one frame, but the bats went quiet and Northwest Christian never trailed again.

The ninth-ranked Bulldogs (3-2, 2-2 3A West Region) welcome Northwest Christian to town for a rematch at 1 p.m. Saturday.

At Chino Valley, the Lady Tigers are still searching for their first region win of the season after they fell 6-2 Tuesday to the No. 25 ranked Lady Cougars (3-3, 1-2 3A West Region).

Randa Short and Lynsey Day paced Academy with two hits each, while Short and Oreauna Holland drove in a run.

The Lady Tigers allowed a run in the first inning and three more in the fifth before scoring twice in the top of the sixth.

At Northwest Christian, the first of four games in a week didn’t go in favor of the Lady Bulldogs Tuesday as they dropped a 7-2 setback to the sixth-ranked Lady Crusaders (8-0, 2-0 3A West Region).