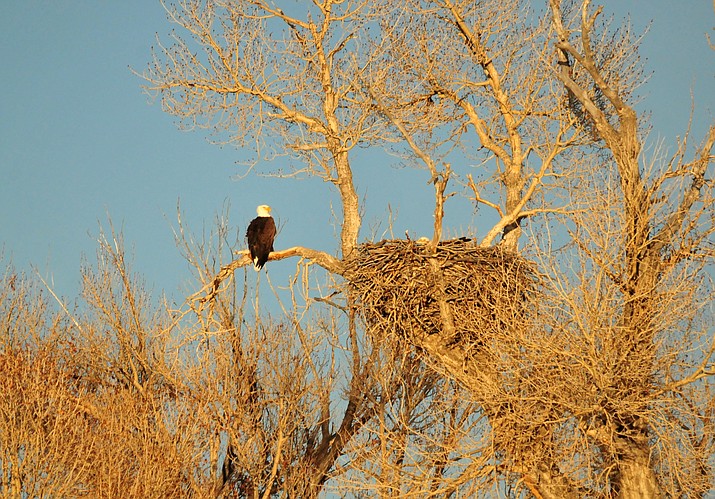 The wait may be over Sunday, March 31 for a new American Bald Eagle chick. The only surviving egg of two eagles at Lake Pleasant is set to hatch soon, and everyone can watch it live at the Arizona Game and Fish website. (Photo by Tom Koerner/U.S. Fish & Wildlife Service)

KINGMAN – Starting Sunday, March 31 the Arizona Game and Fish Department will be live-streaming from the bald eagle camera and the egg nestled inside a nest on Lake Pleasant. It’s then when the fourth – and lone surviving – egg laid by a pair of nesting bald eagles will have completed its 35-day incubation period, meaning the egg could begin hatching at any moment.

Since the department’s live-streaming bald eagle camera went live Dec. 18 more than 320,600 people have tuned in for the ensuing drama.

“The first egg was eaten by ravens. The second was eaten or damaged by a ringtail,” Meyers said.

Egg three? Ravens, once again. On Feb. 24 – one day after losing the third egg – the female laid a fourth. This time the new nesting pair drew from hard lessons about the importance of ensuring the egg was incubated at all times and the need to work together to ward off predators looking for their next easy meal.

The live-streaming camera is funded through Heritage and Pittman Robertson funds, and public donations. Those wishing to support the Watchable Wildlife program can click the “donate now” button after selecting which live camera feed to view at www.azgfd.gov/livecams.

To support the department’s effort to conserve and protect Arizona’s more than 800 native wildlife species, the public can purchase a Conservation Membership package at www.azwildlifehero.com and clicking on “support us” and “become a member.” Different membership levels come with special perks, from a beautiful set of wildlife notecards to an annual subscription to Arizona Wildlife Views Magazine.

The bald eagle cam is the fourth wildlife camera offered by the department, which also provides seasonal views of wintering sandhill cranes in southeastern Arizona, a bat roost at Cluff Ranch Wildlife Area and an underwater pupfish cam. All the live streams can be viewed at www.azgfd.gov/livecams.