From one little ad to a nation and world of lady motorcyclists. And there is a chapter right here in Mohave County 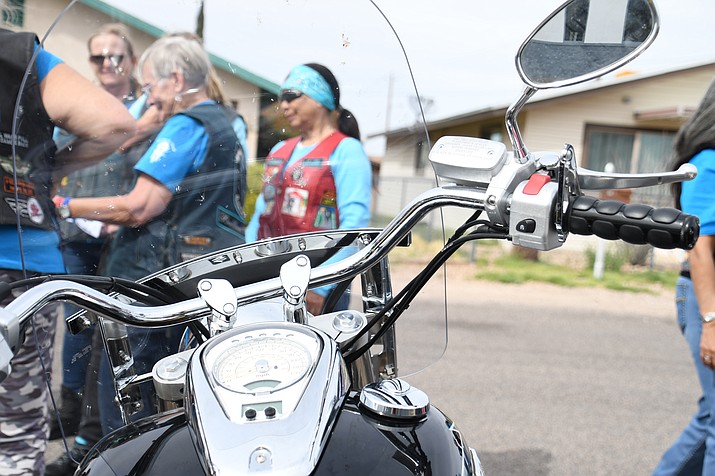 Women of the Cactus Cuties chapter of Women in the Wind stand talking about an upcoming event before hopping on their bikes. (Photo by Vanessa Espinoza/Daily Miner) 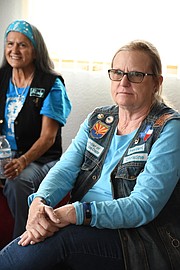 Christine Allen, front, president of the Cactus Cuties, and member Helen Leeds listen to other women tell their riding stories at the house of one of the members. (Photo by Vanessa Espinoza/Daily Miner)

Women in the Wind all started with an ad. An ad in the classifieds section that simply read “Attention Lady Bikers.”

In the mid-1970s, founder Becky Brown didn’t know of any other women riders in her area. She envied the brotherhood she saw in the male-dominated motorcycle clubs so she decided to try to find fellow women riders who shared her love of riding.

She placed an ad in her local newspaper in the spring of 1979 and was surprised at the enthusiastic response she received.

Ten women responded to the ad.

The group’s first ride was on the scenic roads along the Maumee River.

Women in the Wind grew to 70 chapters and over 1,400 members in the United States and as far away as England and Australia by the early 2000s.

As of February, there are 128 Women in the Wind chapters located in Australia, Canada, Ireland, Nepal, New Zealand, Portugal, the United Kingdom and the United States. That’s about 1,600 members worldwide.

There are 22 of those members right here in Mohave County as part of the Cactus Cuties Chapter.

Christine “Prez” Allen, president of the local group, said she grew up around motorcycles and always wanted to find a group here in Kingman. She had been riding with other groups, but she wanted to find an all-woman group.

“I wanted to ignite a global sisterhood of inspirational women to promote courage, adventure, unity and passion for biking from all corners of the world and do something that’s never been done before to this scale,” said founder Hayley Bell from the United Kingdom.

The aim of the Women Riders World Relay is to wow the industry into realizing the global market for women in Motorsports and to inspire women worldwide.

“Going into motorcycle stores and seeing a lack of choice, combined with stereotypical pink and being told ‘there just isn’t the market for women,’ highlighted to me just one small element of a much bigger picture around women in motorsports,” Bell said. “I want to show the industry the force behind the market that is so blindly overlooked. I am doing this because women bikers can make this happen.”

The WRWR organizes and participates in, a world-wide women’s motorbike relay, covering even the remote, the daring and the vast parts of the world. They aim to continue this event and more through global sponsorship.

They have collaborated with a global community of enthusiastic women bikers. Women worldwide have responded to the call and shared enthusiasm for the event.

“We reached a huge milestone of over 10k group members from more than 80 countries in just 4 weeks due to this spirit,” reads their press kit. “Through our sheer masses, borderline bonkers aspirations, unity and determination, the women of WRWR can pull off the largest recorded worldwide motorbike relay.”

WRWR have a small team from numerous countries worldwide who are collaborating to organize the event.

“We co-ordinate women motorcycle riders across the world to participate in the Women Riders World Relay, bringing fun, experience, confidence and a sense of unity to women riders globally,” reads the mission statement.

They are, to put it simply: “Adventurous. Courageous. Inspiring. United.”

That was when she found out about Women in the Wind.

“I was the only girl growing up,” Allen said. “I had brothers, so these women are like the sisters I never had.”

Connie “Birdy” Sadler, a member of the sister chapter SinSitySisters out of Las Vegas, said that women are a rapidly growing demographic in the motorcycling world, and they will make up about 25 percent of the riders nationwide in a few years’ time.

But it isn’t just the younger generations that ride.

Sadler starting riding when she was 53 years old and has been with her chapter for six years. Her group member Mary Ann “Pinky” Godfrey started when she was 70.

“I had never been on a bike before,” Godfrey said. “Connie took me to every place in town, and taught me how to ride. I’ve been riding ever since.”

For someone like Helen “Blinky” Leeds, a self-described newbie when she started at the age of 57, the group has taken her a long way, both in riding miles and in her interest.

Most women joined the Cactus Cuties by running into Allen or other members on rides. Vicky “SpyderGirl” Goldstone said it was her husband who brought Allen’s card home.

“He probably regrets it now,” Goldstone said with a laugh.

So why a women’s group?

Well, to put it simply, for Helen “Giggles” Uvalles, it was about the comradery. Godfrey said one of the biggest differences between men’s groups and women’s groups seems to be the focus on safety.

“Guys are also more critical,” Sadler said. “Women will help and they’ll be instructive and give positive criticism.”

For Leeds, it is a great way to take the mind off of drama at home.

“You can just leave that all at home, take your mind off of it, and have the comradery to just talk,” Leeds said.

And talk they do. But most of what these women talk about is their bikes. They are always talking about their bikes, said Priscilla “Lolli” Wilcox. Just like the guys, she added.

There are monthly meetings to discuss upcoming rides and safety updates. One of the biggest things they talk about is awareness on the road, for both motorcyclists and car drivers.

“Look, the way I look at it is everyone else on the road is an idiot,” said Penny “Paws” Townswend. “You just have to think that way. We can’t just look at the car in front of us, we have to look at the car three cars up.”

Allen just asks that everyone keep an eye out for motorcyclists. Always check around for them.

Even though there are serious matters such as safety, these women are serious riders whose goal is to simply keep up with Allen, who has ridden thousands of miles this year alone.

Everyone posts rides, either open for all or closed for just members, that they may be going on.

One upcoming ride is a ripple relay that is running in parallel with the Women Riders World Relay – a worldwide baton pass relay. Townsend will be riding with Sadler and another member to Mesquite, Utah to accept the ripple relay’s baton and carry it through to Henderson.

From Henderson, the baton will come to Kingman and there will be a handoff party at 11:30 a.m. April 10 at Mother Road Harley, 2501 Beverly Ave. A group of women from a San Diego chapter will be there to pick up the baton and bring it back to California.

The main baton from WRWR likely won’t be coming through Kingman, but it will be making the trip with Sadler and the other SinSitySisters from Las Vegas to Los Angeles around Oct. 6 of this year.

As of last week, the WRWR baton was in Italy.

Cactus Cuties membership is open to women that own or operate a motorcycle of any make. Members are required to hold a valid driver’s license with a motorcycle endorsement or permit.

For anyone interested in the local chapter they can reach out to witwcactuscuties@yahoo.com or call 702-624-1160. Anyone who may have interest in the Las Vegas chapter can reach out to them at witw.sinsitysisters@gmail.com or visit their public Facebook page.

For those looking to meet the group or learn more of what they do, they are welcome to swing by Mother Road Harley on April 10 or any of their monthly meetings.

“And you need to feel the fear, and just do it anyway,” Uvalles said. 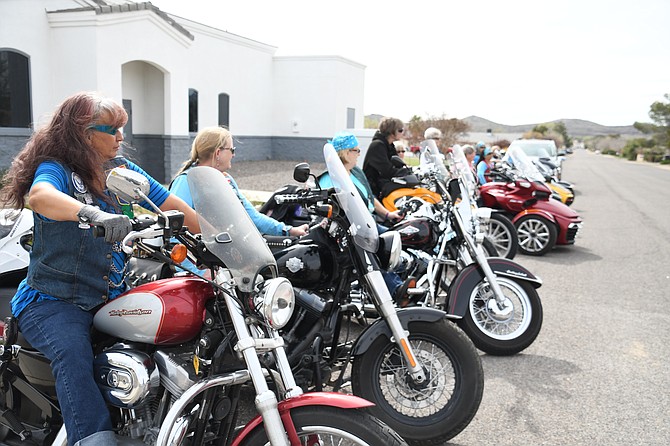 Members of Cactus Cuties and SinSitySisters sit on their bikes preparing to head out onto the open roads. (Photo by Vanessa Espinoza/Daily Miner)