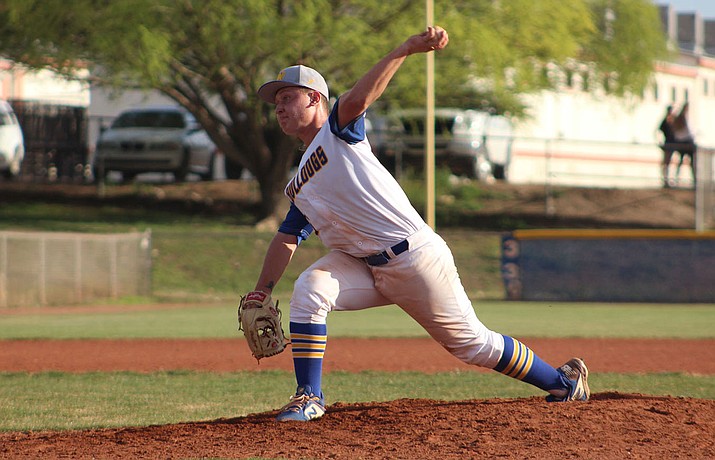 Kingman’s Rilee Araya was dominant on the mound Saturday as the senior struck out 11 in a 7-1 victory against Northwest Christian. (Daily Miner file photo)

KINGMAN – What a difference a few days can make.

The Kingman High School baseball team avenged a loss to Northwest Christian and did so in grand fashion Saturday with a 7-1 victory.

The Bulldogs dropped an 8-3 setback at the No. 8 ranked Crusaders (8-3, 2-2 3A West Region) on Tuesday, but bounced back at home behind Rilee Araya’s great outing on the mound.

The senior hurler struck out 11 and walked just one in a complete-game effort. Araya was also backed up by Kingman’s offense as a four-run sixth inning sealed the deal.

TJ Harviston led the Bulldogs with two hits, while Coleton Padilla added a three-run triple in the sixth. Zach McCray, Luke Ness and Hayden Tanner each drove in a run to round out the top performers.

Kingman allowed a run in the first inning, but then shut down Northwest Christian while scoring twice in the second and once in the third.

At Dick Grounds Field, the Vols needed a comeback Saturday but they took care of business in a 13-12 victory over the No. 26 ranked Eagles in eight innings.

At Wickenburg, the Tigers picked up their fourth region win of the season Friday as they cruised past the Wranglers 11-1.

Wyatt Hall picked up the win after striking out nine and walking three in seven innings of work. 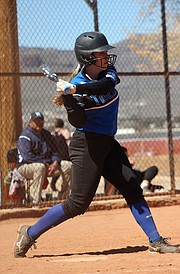 Kingman Academy freshman Ammerissa Benson went 3-for-5 and drove in two runs Friday as the Lady Tigers racked up 15 hits and 10 RBIs in an 11-7 win at Wickenburg. (Daily Miner file photo)

At Wickenburg, the Lady Tigers won back-to-back games for the first time this season while also notching their first region win of the year in an 11-7 victory over the No. 16 ranked Lady Wranglers (4-4, 0-3 3A West Region).

Ammerissa Benson went 3-for-5 with two RBI, while Shay Lee and Abbie Bean also drove in two runs apiece. Lynsey Day, Gabi Lobue, Randa Short and Kiley Holloway each drove in a run to round out the top performers.

At Flagstaff, the Lady Vols dropped their eighth-straight loss Saturday in an 11-0 setback to the No. 18 ranked Lady Eagles (5-2, 4-1 4A Grand Canyon Region) in five innings due to the run rule.

At KHS, the Lady Bulldogs couldn’t find an answer Saturday in a 16-1 loss to the sixth-ranked Lady Crusaders (9-1, 3-1 3A West Region)