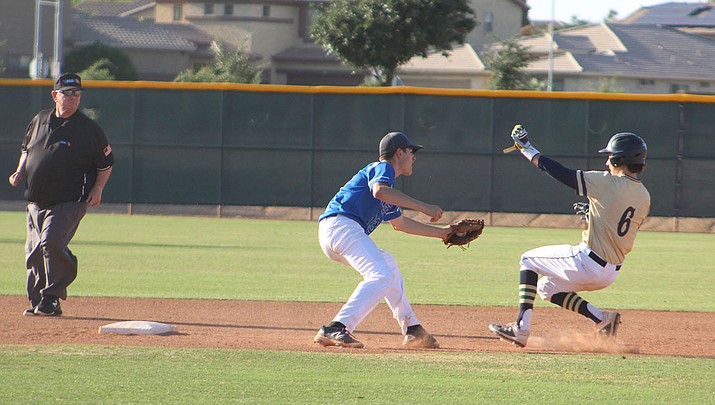 SURPRISE – The Kingman Academy High School baseball team entered the 2019 season not knowing what would happen. So once the dust settled Friday evening, the Tigers kept their heads held high after an 11-6 loss to fifth-seeded Yuma Catholic in the first round of the 3A State Championship at Surprise Sports Complex.

“It is a surprise,” Academy coach Bill McCord said of the season’s accomplishments. “One minute they looked like superstars and next minute they look like we have to rebuild everything. But they came through in the big games at the end – Northwest Christian and then San Tan Foothills. And that showed that they wanted to be there. They battled hard.”

The No. 12 seed Tigers proved that with a sixth-inning rally against the Shamrocks that pulled them within one, 7-6.

Kaden Bean started the spark with a two-run single, followed by Braden Judd scoring Bean on a base hit of his own. The Tigers were down 7-3, but not done yet.

Gage Edwards entered as a pinch-hitter and connected on two-run single and Joey Sanfilippo – the first batter of the inning – stepped back up to the plate and singled home Edwards for a 7-6 deficit.

“It was exciting to see them make a charge, it really was,” McCord said. “We thought we had a good charge in there. A couple of things didn’t go our way in the bottom of the sixth and the scoreboard changed.”

Unfortunately, that was indeed the case as Academy went from down a run to trailing 11-6 entering the top of the seventh. The Tigers were unable to replicate the rally from the previous inning and that was the ball game.

“I’m proud of them, I’m very proud of them,” McCord said. “We have a good season to look forward to next year. We have a bunch of young kids coming up and then our old guys will be there.”

Academy will lose five seniors to graduation, but welcome back a strong core from this year’s squad. That group includes Bean, Judd, Sanfilippo, Wyatt Hall and Ryan Hurley. And McCord is already planning to make sure they’re ready for next season.

“We have some juniors that need to put some work in this summer,” he said. “We just told them that – ‘Hey these guys are the ones working, you guys need to get to that level.’ And that’s my job, we’ll get them working.”