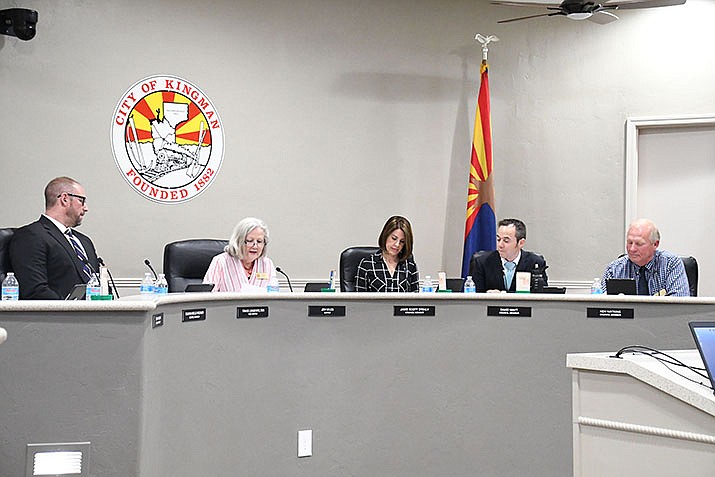 City Council approved to move forward with an intergovernmental agreement with NACFD to provide management services during its meeting on Tuesday, May 7, 2019. (Photo by Vanessa Espinoza/Daily Miner)

KINGMAN – City Council is moving the City forward with an intergovernmental agreement for management services between the City of Kingman and Northern Arizona Consolidated Fire District.

The agreement would allow for the City to provide management services, including fire chief services, 24 hours a day, seven days a week.

Kingman Fire Department Chief Jake Rhoades brought forth to council a packet that answered prior questions, including the topics of liability and exit statutes for the management services agreement with NACFD. The packet also included a pilot agreement from Flagstaff and talking points during discussions with NACFD.

Vice Mayor Travis Lingenfelter asked Rhoades about the level of public safety at the industrial park and Kingman High School with both locations outside of city limits.

“Looking at this I’m confident and hopeful that your involvement will bring the level of service kind of on par with what they would receive if they were in our city limits,” the vice mayor said.

Rhoades said both agencies rely on each other when it comes to larger structures.

Councilman David Wyatt asked how the IGA would work if there are outstanding debts or legal issues.

Rhoades said the City and the districts are two separate entities and that’s where a contract would be written up so it can be “air tight.”

Councilman Ken Watkins asked how all parties involved were feeling.

“What we had initially was fear because who know what this looks like …,” Rhoades said. “But now you see it, we are already trained and doing those things.”

From the fire department and operation standpoint, Rhoades said it’s all systems go.

City Attorney Carl Cooper said this is just the first step toward moving forward and time is needed to draft up a negotiation agreement for both parties to approve the process.

“This is the opportunity to put some things on paper to really bring forward to both governments,” Rhoades said.

Mayor Jen Miles said she has a lot of confidence in the pilot IGA and the synergies that can be enhanced for the community by both entities working together.

The City will make available to the district reports including location of events utilizing cross streets, addresses, maintenance status time, time received, time dispatched, time of first unit on scene and the time the last unit cleared the scene, and other fire service benchmark times as available.