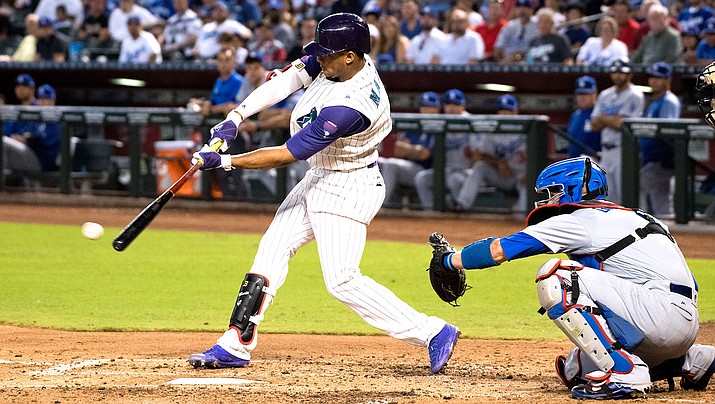 Ketel Marte connected on his second career walk-off Thursday night to give the D-backs a 3-2 victory over the Braves. (File photo courtesy of Sarah Sachs/Arizona Diamondbacks)

PHOENIX (AP) – After playing 13 innings on the road the day before, a long game with a taxed bullpen was about the last thing the Arizona Diamondbacks wanted Thursday night.

Ketel Marte made sure this one ended in 10.

David Peralta hit a tying homer with two outs in the ninth inning and Marte singled home the winning run in the 10th to give Arizona a 3-2 victory over the scuffling Atlanta Braves.

Josh Donaldson put the Braves ahead 2-1 with a leadoff homer against closer Greg Holland in the top of the ninth. Luke Jackson retired the first two batters in the bottom half before Peralta sent a drive over the right field fence.

"We never give up. We are going to battle every at-bat," Peralta said. "We told Holland, 'Don't worry, we got your back.' The guy made a mistake with me hanging a slider."

Jackson had held opponents scoreless over his past 15 innings and converted his previous two save chances.

"Felt great out there. Got two quick outs. Fell behind a good hitter, made a bad pitch," Jackson said. "Unfortunately, it cost us huge. Wish I could have locked that down, but you can't dwell on it."

Nick Ahmed drew a leadoff walk from A.J. Minter (0-4) in the 10th and went to third on Carson Kelly's single. With the infield playing in, Marte won it with a blooper that fell between two Braves in shallow right field for his second career walk-off hit.

"I just tried to put the ball in play," Marte said. "He threw me a fastball up and in, but I just put my hands inside and got the base hit."

Minter was unable to hold down the closer role after the Braves lost Arodys Vizcaino to season-ending shoulder surgery last month.

"I think it's another product of a guy that didn't have spring training," Atlanta manager Brian Snitker said of Minter. "He hasn't been throwing like we saw last year."

Arizona right fielder Adam Jones took a potential two-run homer away from Ronald Acuña Jr. when he reached above the fence to bring in a long fly in the sixth.

Called up from Triple-A Reno before the game, Jon DuPlantier (1-0) worked a scoreless inning for his first major league win.

The surprising Diamondbacks (22-16) won their second consecutive extra-inning game after beating Tampa Bay in 13 innings at Tropicana Field on Wednesday.

Braves right-hander Mike Soroka, who won his previous three starts, allowed one run in six innings. The 21-year-old has permitted one earned run or none in each of his five starts this season and eight of 10 in his career.

The Diamondbacks went ahead 1-0 when Christian Walker came home on Wilmer Flores' groundout, after Walker led off the second with his first major league triple.

Atlanta tied it in the third when former Diamondback Ender Inciarte scored from first on Ozzie Albies' double that was initially misplayed off the wall by Jarrod Dyson. But the center fielder recovered quickly and fired to third base to get Albies.

The Diamondbacks flashed more good defense in the seventh. Peralta dived to his left to grab a sinking line drive hit by Nick Markakis, and Jones ended the inning by hauling in Brian McCann's deep drive to right against the fence.

"There's really good things on the back end of tough times in this business," Snitker said.

Ahmed appeared in his 38th game, the only Arizona player to have played in every game this season. Four Braves have played in all 38 games: Albies, Markakis, Freddie Freeman and Dansby Swanson.

Braves: LHP Max Fried is on track to make his next start Sunday at Arizona after getting hit with a comebacker on his pitching hand in the second inning Tuesday against the Dodgers. Fried left that game.

D-backs: C Alex Avila (quadriceps strain) is scheduled to run the bases and continue catching bullpens this week. He's been on the injured list for a month. ... INF Jake Lamb (quadriceps strain) is taking batting practice and throwing, and running the bases is next as he moves closer to a return. ... RHP Taijuan Walker is scheduled for a bullpen Friday as he aims to return from elbow surgery. ... Weaver was hit with a grounder in the sixth and checked by a trainer, but remained in the game.

Braves: RHP Julio Teheran (2-4, 4.63 ERA) faces Arizona on Friday in his ninth start of the season. His 20 walks are the most among Braves pitchers.