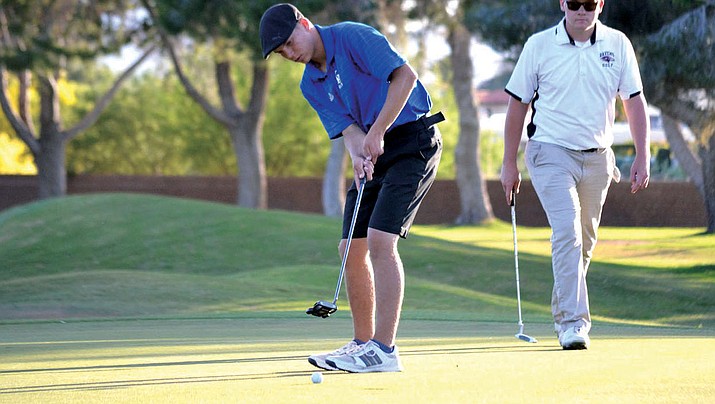 Kingman Academy junior Jake Scott shot a 19-over 165 during the two-day Division III State Golf Championship at the Catalina Course of the Omni Tucson National. (Courtesy)

KINGMAN – Improvement is improvement, even if it is by small margins.

Jake Scott knows that all too well after the Kingman Academy High School junior tied for 21st during the two-day Division III State Golf Championship at the Catalina Course of the Omni Tucson National.

“I know that I only scored one place better this year, but I definitely think I’ve improved a lot since last year,” Scott said. “I just have to work harder for next year and see what I can do.”

Scott had aspirations of finishing in the top 10 and at one point was in the running for it, but ended up tallying another top-25 finish after he tied for 22nd last season.

“I think at one point I was in eighth place, but I didn’t know that until the very end,” Scott said. “It kind of gives me confidence knowing that I can place in the top 10. It also makes me a little upset that I wasn’t able to finish in the top 10. But that’s OK, there’s always next year.”

“He did a great job,” said Tigers coach BJ Maticic. “I know he wanted to do better – his goal was to be in the top 10 this year. He’s capable of doing it, but golf is one of those sports where almost a flick of a switch things change for you. And that’s what happened for him.”

Scott also had to battle more adversity than a year ago, which played into his performance.

“I think the conditions were harder this year,” he said. “There was a little more wind this year, too. I still placed better, so that just shows how everyone else played compared to me this year as well. So it was a little tougher for everyone this year.”

But he knows he wouldn’t be where he is today without the help of Maticic.

“He’s a great coach,” Scott said. “He helped me a lot. I don’t think I would have been able to play as well without him. I definitely appreciate everything that he does for me.”