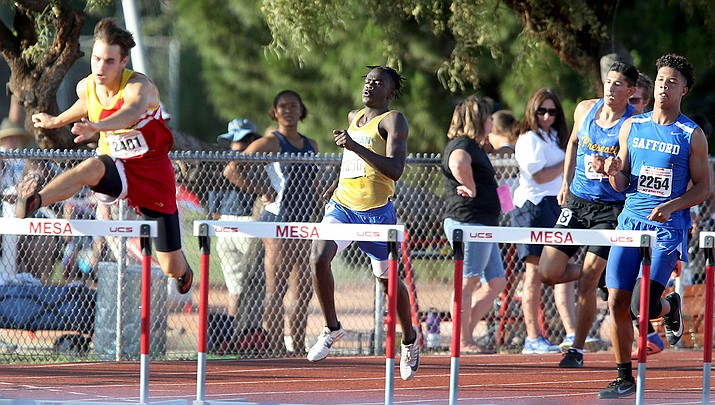 Kingman High’s Jamal Cash tallied a pair of third-place finishes in the 110 and 300 hurdles at the Division III State Track and Field Championship. (Photo courtesy of Oscar Perez/Pinal Central)

KINGMAN – Jamal Cash had two choices following a subpar performance in the long jump – dwell on the 19th-place finish or let it inspire him to succeed.

Cash chose the second option and it paid off as the Kingman High School senior took third in the 110- and 300-meter hurdles at the Division III State Track and Field Championship.

“I just knew I had to focus and transfer my energy to hurdles,” Cash said of what he did after the long jump. “I had to take it out on that. I lost in one, so I had to win in the other. It was motivation, it pushed me.” 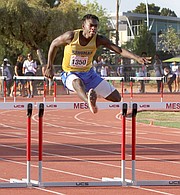 Jamal Cash posted his best times in the 300 hurdles on the biggest state of them all. The Bulldogs senior ran a 40.56 in the finals a day after setting a personal record 40.45 in the prelims. (Photo courtesy of Oscar Perez/Pinal Central)

But Cash didn’t make the trek to Mesa without having a game plan – he knew before he even arrived that he was going to excel on the biggest stage of them all.

“I kind of set a goal – I just knew I was going to get there,” Cash said. “I told myself, ‘I’m going to do this. I’m going to work for it.’ And that’s basically what I did. I worked for it, got there and took it as far as possible.”

Cash may have accomplished even more if it wasn’t for some adversity in the 300 finals. He posted his second-best time of the year (40.56) a day after setting a personal record 40.45 in the prelims, but he was aiming for a better result.

“In the 300 I think I could have finished second or first,” Cash said. “My last two hurdles were on my opposite leg. If I had those hurdles with my dominant leg, I would have been faster. I would have hit them harder and faster. But I kept hitting my opposite leg and messing up. But I had to keep pushing through it.”

That drive led him to a top-three finish, but the determination didn’t just appear out of the blue.

Cash started training once basketball season was over – planning to end his high school career with a bang.

And now that he’s had time to reflect on it all, even he can barely believe it.

“I’m really third in state – I actually did it,” Cash said. “And I actually worked and got it. You know what I mean? A lot of people try so hard and don’t get it. But when you work enough and you put in the effort, when you actually get it – that’s a good feeling. Yeah it’s scary and nervous, but it’s a good feeling.”

That feeling is one that Cash experienced a lot during his senior campaign as he tallied eight first-place finishes in the 110 and added seven more in the 300.

It is even more impressive considering Cash has also had to adjust to Kingman after moving from Baltimore.

But he wasted little time once he arrived, focusing his mindset on being the best.

“When I first came here I looked at everyone’s times and D-1 times,” Cash said. “I never look at my division, I look at the fastest division. So I told myself I have to be here, I have to get their time. That’s when I started realizing that I have to work for it.”

That work ethic was also apparent in the long jump.

He may not have finished as high as he wanted, but competing in the event was an accomplishment in itself.