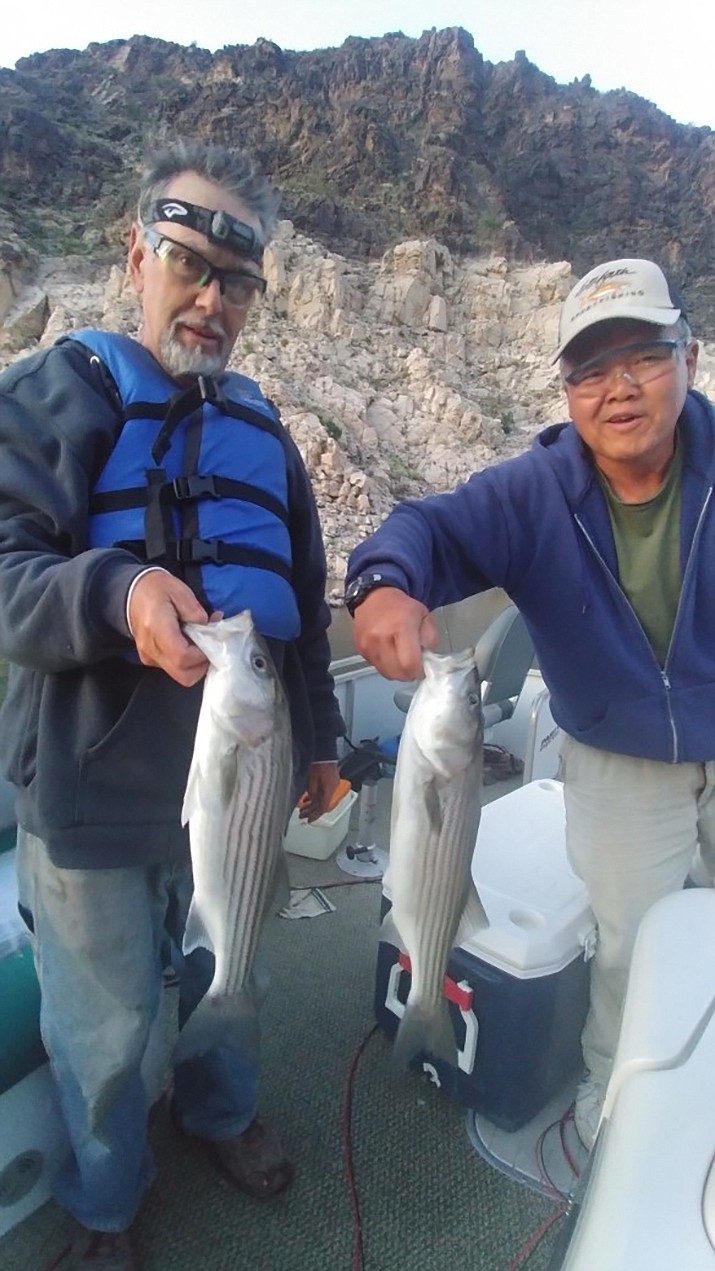 Is there anything better to do on a cool spring night other than to go fishing with friends?

That’s what it was last Friday evening when a group of us, who are all volunteer Arizona Hunter Education Instructors, made a trip to Lake Mead to try out the nighttime striper fishing.

Jay Chan, John Schmidt and I have been friends and hunter education instructors for a long time.

We’ve spent a lot of time together at the 7 Mile Hill Range teaching youngsters and adults alike the tenets of being safe and lawful sportsmen.

But out of the classroom, we also spend some time together. In September we all make a trip or two out to hunt doves in the desert.

And occasionally, we get together to try our luck on the largemouth and smallmouth bass, stripers, and catfish that swim in the waters of Arizona’s largest manmade lake.

And since I am getting ready to start my summertime striper fishing trips, it was a good opportunity if the fishing was good.

First stop was at my place in Meadview to pick up the equipment we needed for the trip. Schmidt cut up bait while Jay and I loaded up the boat. With everything in place, off to the lake we went.

It rained in Meadview that afternoon and the weather was unseasonably cool. A light breeze greeted us as we launched the boat at South Cove and headed to one of my favorite fishing spots in Virgin Canyon.

With the boat anchored, and lights in the water, we started fishing.

It didn’t take long before the action started. Chan got on the board first, and often. But John wasn’t giving the stripers any slack, either.

Both started off catching fish while all I did was watch as my fellow anglers brought stripers to the boat.

Here is how bad it got. Both Chan and Schmidt had double-digit catches while I had just three stripers to my credit. This despite using the same bait, fishing in the same general area, and using almost the same techniques. Sometimes, it just happens that way.

The only good news was that at least for the first half of the trip, I did have the largest striper and channel cat that had been caught. Quality over quantity, I told them. “Yeah, right,” they replied, as they continued to catch stripers.

The action was slow but steady (at least for them) until around 4 a.m. when a phenomenon occurred that none of us had seen in many years.

I use exclusively HydroGlow submersible fishing lights on my boats to set up the food chain at Lake Mead. These green lights attract the phytoplankton and zooplankton that is in the lake. The lights attract these single-cell organisms and small minnows feed on them.

The minnows and plankton attract larger fish, including threadfin shad, which is the main food source for the 2 to 7 million stripers that are in the lake. The stripers will show up to feed on these tasty silvery morsels.

Within minutes of putting the submersible lights in the lake, the plankton showed up, and then the minnows arrived. All night long we watched as the minnows gathered around the lights to feed.

What we didn’t expect was when literally thousands of 3 to 5 inch threadfin showed up and started circling the boat.

Of course, when you’ve got that many baitfish swimming in one area, large groups of stripers are bound to follow.

There were so many of the shad in the water that you could literally feel them hitting the hull of the boat.

I grabbed the landing net and started flipping shad out of the water and into the boat.

We picked up the shad and put them on our hooks, replacing the pieces of cut up anchovies we had been using for bait.

The action was unreal and nonstop! As fast as you could drop the bait into the water, a hungry striper was there to gobble it up.

For about an hour it was wide open, and we quickly filled up the large ice chest we were using to keep our catch on ice.

We put shad, which expired quickly, in our bait buckets to use for bait. In the end, we gathered enough shad to almost fill up an empty 1 gallon plastic tea jug.

Then as suddenly as they had arrived, and with the darkness giving way to a new day, the shad were gone and with them went the stripers.

But our catch in the frenzy had been good. We ended up with 99 fish; 96 stripers and three channel cats. And if John hadn’t lost four stripers at the boat, we would have made double digits.

The fish were in the best shape I’ve seen them in years. Chunky, with “shoulders” that produced lots of thick, good-eating filets.

Time to get in the game

The Kingman Fire Fighters Association is having its annual overnight striper fishing tournament at 4 p.m. Friday, May 17 starting at South Cove.

My friend, Ryan Asplin, and I are entered into the tournament and we’re looking forward to another night of quality fishing.

This event is open to the public and there is still time to enter. Call Mike Stapleton at 760-450-4954 or Matt Wolsey at 928-279-3926 to get an application. Now is the time to go after these hard-fighting and good-eating fish. Water levels are high, and obviously, the forage base is great this year.

Remember, there are no limits on stripers under 20 inches long that are taken in Lake Mead, and the daily limit of those fish over 20 inches is a very generous 20 per day.

Stripers still biting at night on Lake Mead
Column | Here are some tips on how to make your Lake Mead fishing trip successful
Second-chance trip turns into unique frenzy of fishing
Fishing Report
It's only a net - how hard can it be? (Hint: Kinda hard)