China retaliates on tariffs, stock markets go into a slide 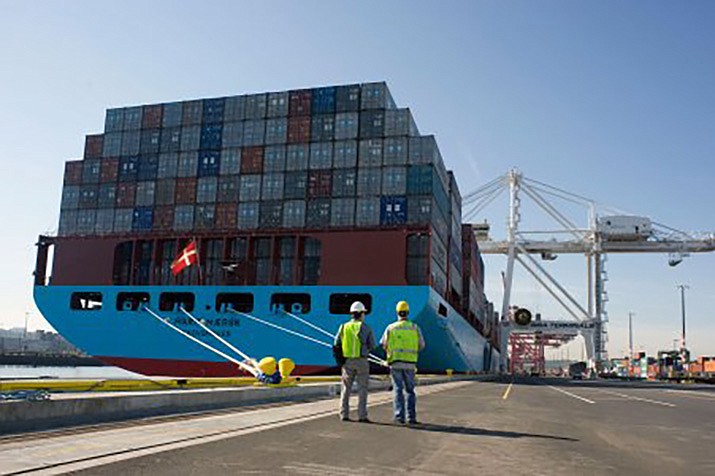 The Marit Maersk loaded with shipping containers at the Port of Tacoma. China has announced tariff hikes on $60 billion of U.S. goods in retaliation for President Donald Trump's escalation of a fight over technology and other trade disputes. (Port of Tacoma photo)

Duties of 5% to 25% will take effect on June 1 on about 5,200 American products, including batteries, spinach and coffee, China's Finance Ministry said.

With investors worried about the potential economic damage on all sides from the escalating trade war, the Dow Jones Industrial Average fell 617 points, or 2.4%, and the technology-heavy Nasdaq plunged 270 points, or 3.4%, its biggest drop of the year. Earlier, stocks fell in Europe and Asia.

"We appear to be in a slow-motion train wreck, with both sides sticking to their positions," said William Reinsch, a trade analyst at the Center for Strategic and International Studies and a former U.S. trade official. "As is often the case, however, the losers will not be the negotiators or presidents, but the people."

Beijing's move came after the U.S. raised duties Friday on $200 billion of Chinese imports to 25%, up from 10%. In doing so, American officials accused China of backtracking on commitments it made in earlier negotiations. The same day, trade talks between the two countries broke up without an agreement.

On Twitter, Trump warned Xi that China "will be hurt very badly" if it doesn't agree to a trade deal. Trump tweeted that Beijing "had a great deal, almost completed, & you backed out!"

The rising trade hostilities could damage the economies of both countries. The tariff increases already in place have disrupted trade in such American products as soybeans and medical equipment and sent shockwaves through other Asian economies that supply Chinese factories.

Still, the two countries have given themselves something of an escape hatch: The higher Chinese tariffs don't kick in for 2½ weeks. The U.S. increases apply to Chinese goods shipped since Friday, and those shipments will take about three weeks to arrive at U.S. seaports and become subject to the higher charges.

Also, both countries have indicated more talks are likely. Top White House economic adviser Larry Kudlow said Sunday that China has invited U.S. Trade Representative Robert Lighthizer and Treasury Secretary Steven Mnuchin to Beijing. But nothing has been scheduled. And Trump said Monday that he expects to meet Chinese President Xi Jinping in late June at the G-20 summit in Osaka, Japan.