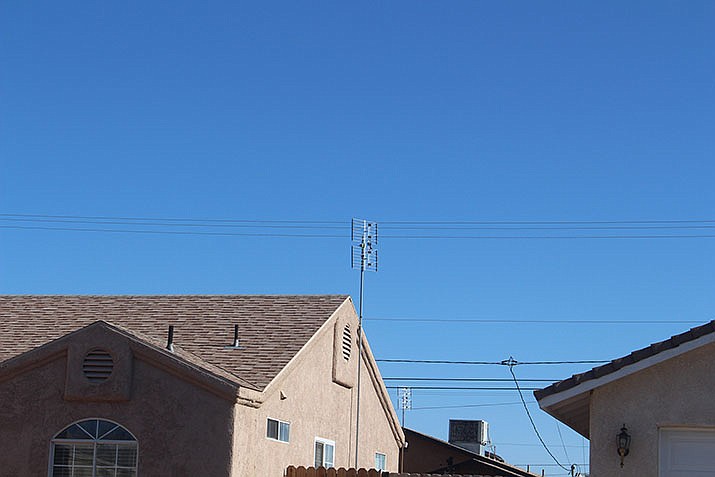 A TV antenna on the roof of a residential house in Kingman. (Photo by Agata Popeda/Daily Miner)

The good news is Kingman has two more over-the-air TV channels, as The Daily Miner found after a local resident discovered their existence and shared his knowledge with the public. The bad news? The county, as well as the regional TV provider WECOM, had no idea about it.

A simple rescan of your TV antenna will add Get TV (classic movies and TV shows from Sony Pictures) and Court TV (a 24 hour coverage of most high profile trials), both added May 8. Residents need to rescan their televisions in order to pick up the signals.

“Unfortunately, these additional sub-channels are added into the television stream by the network often without any notification to the county,” said Assistant to the County Manager Yvonne Orr. “In the event the county is made aware of the new sub-channels, we can take the necessary steps to inform the public.”

“Sometimes they sneak up on us,” said Ken McLaughlin, a representative of WECOM. By “they” he means his company’s main office in Tempe. “We check it daily, but we don’t always know when they add something. Once in a while they call me.”

It is not easy to figure out how things work within the Mohave County Television Improvement District, “the only district of its kind in Arizona,” according to the Mohave County website. It started in 1983, initially providing UHF television reception via signal translators, licensed through the Federal Communications Commission. That allowed antenna-based television broadcasting in a mountainous region, otherwise inhospitable to television reception.

The future of the TV district is being brought up regularly during Mohave County Board of Supervisors sessions. Local broadcasters have been trying for years to join, but the county has permission to re-broadcast only, and cannot broadcast original local content without changing the law. An investigation on how such stations might be allowed to join the district’s lineup continues.

“More changes are coming,” McLaughlin said. “An entire slot of channels,” but those are networks’ decisions, and details are not known.

Since 2016, the TV District has been operating at a financial loss. The county manager’s office is charged with its oversight and improvement. Mohave County Supervisors seem divided on the issue with Hildy Angius being disappointed by the district’s current condition, and Buster Johnson and Jean Bishop considering it a great service and promoting its growth.

Politics aside, actual and precise directions on how to find the two new TV channels were not available via WECOM or from the county. Fortunately, a local resident with “strong interest in the TV stations here in Kingman” was able to be more precise.

“One can find Court TV on 15.5. GetTV is technically on channel 12.4, but it actually displays on your TV screen as channel 35.3,” he explained. “If you cannot receive channel KPNX channel 12 from Phoenix over the air, you cannot get GetTV on virtual channel 35.3. I know it is confusing, but that is just the way it is.”

No matter if you use the service or not, all Mohave County property owners pay for it with $.02/$100 of assessed valuation. That means if a property is worth $100,000, the owner will pay $2 each year through their property tax.

Editor's Note: This story was changed to show the amount that a property owner should expect to pay based on $100,000 Limited Property Value is $2.