Prep Football: Tigers off and running in Morgando’s second year at the helm 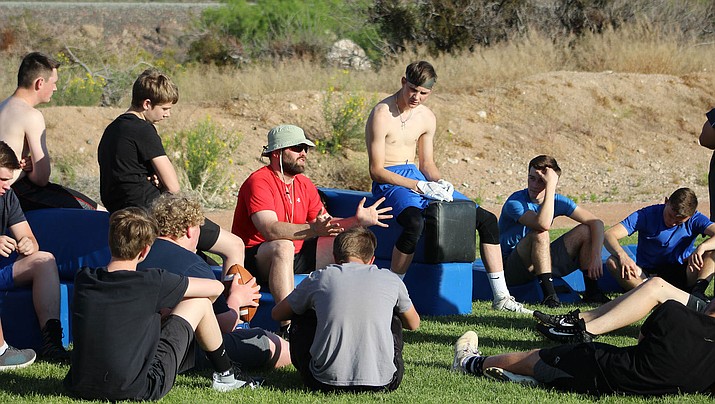 KINGMAN – John Morgando is entering just his second year as Kingman Academy High School football coach, but the former Tigers assistant knows exactly what it takes for a team to succeed – maximum effort and determination.

“I want it to be a positive experience. I want it to be fun for them – but it is work,” Morgando said. “To compete, it is work. And that’s the big thing – learning to be competitive, wanting to win and wanting to play hard because it’s exciting and those sorts of things.

But that drive to succeed needs to be nurtured by a coach and that’s exactly what Morgando did Tuesday afternoon at Southside Park.

Following some grueling drills that tested everyone’s agility, he took a seat on a training bag and had a heart-to-heart with the Tigers about what it takes to succeed.

His speech will no doubt pay dividends down the road, but Academy has already jumped out to a great start to spring ball.

“We’ve not had a bad spring practice,” Morgando said. “Everything is good, everything is positive. We’re getting stuff installed. We’re seeing some good things and seeing improvements here and there – seeing some definite athletic improvements in certain kids from a year ago because they’ve been putting the work in.”

There has also been an increase in numbers from a year ago, which should bode well as Academy battled depth issues last season.

“We have a few extra kids coming out that didn’t play last year, which is positive,” Morgando said. “Adding more kids is where you want to go with a program. It’s nice to be in second year in and you’re adding kids.”

However, it won’t get any easier for the new faces as Morgando is determined to pick up the pace to ensure improvement in 2019.

“I’ve kind of set the expectation that the conditioning will be harder this summer going into this fall than it was last year,” he said. “Because we set standards last year that we never really have set before. And now they’re harder this year because we should be better this year.”

There is no telling how the Tigers will fare during their second season in the 3A West Region, but one thing is for sure – the athletes on the field will give it their all.

“I’d rather have the kids who are going to work,” Morgando said. “And we’ve that kind of conversation already with our group. I want them to work. Yeah I want a lot of kids – I’d love to have 50-60 kids out here and look like a college team with those numbers – but ultimately it comes down to I want the kids out here to work.”