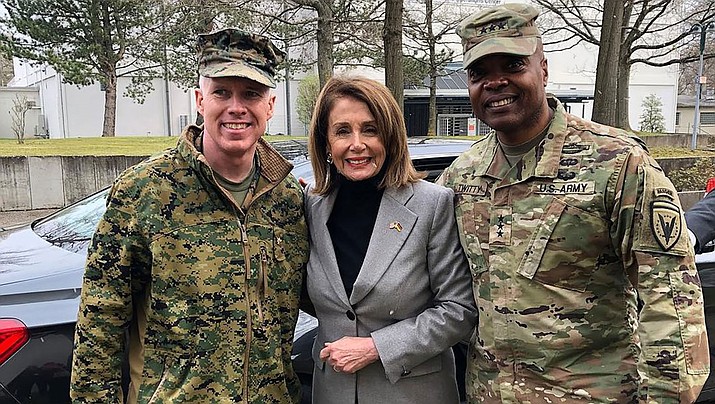 WASHINGTON (AP) – Lawmakers from both parties in Congress demanded more information on the White House’s claims of rising threats in the Middle East, warning President Donald Trump off a dangerous escalation with Iran.

The top leaders in Congress – the so-called Gang of Eight – are to receive a classified briefing from the administration today.

But House Speaker Nancy Pelosi said the White House has resisted a wider presentation for all lawmakers, part of what Democrats say is a pattern of stonewalling. Some Republicans, including Utah Sen. Mitt Romney, sought out their own briefings as the administration called U.S. personnel home from Iraq and sent military might to the Persian Gulf, claiming unspecified threats linked to Iran.

Pelosi said Trump has “no business” moving toward a Middle East confrontation without approval from Congress.

“We have to avoid any war with Iran,” she told fellow Democrats in a meeting, according to a person in the room who spoke on condition of anonymity to discuss comments from the private gathering.

On Wednesday, the U.S. ordered all nonessential personnel to leave Iraq, and last week an aircraft carrier group and other resources were shifted to the Persian Gulf region.

In public and in private, officials are sticking by the administration’s warnings of serious threats from Iranian-backed forces in the region, yet they reject the idea that the U.S. moves are a prelude to war. Trump himself denied a report Tuesday that the administration had reviewed a plan to send 120,000 troops.

Still, the actions are exposing skepticism in the U.S. and among foreign allies, a legacy of the 2003 invasion of Iraq that was based on false intelligence.

Congress demands answers from Trump about Soleimani killing
Trump officials to Congress: Goal is deterring Iran, not war
Dual hearings on Capitol Hill focus on Trump's Iran policy
Pelosi orders impeachment probe: ‘No one is above the law’
Trump deploys more troops to Mideast after US embassy attack