Prep Football: Vols focusing on their craft during spring ball 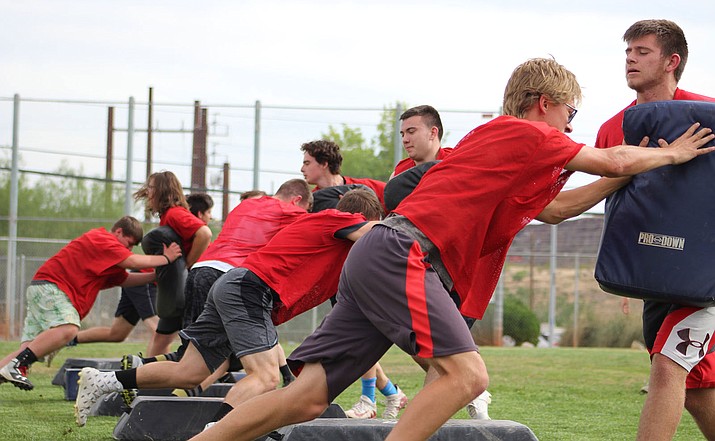 KINGMAN – It is not often a first-year head coach has an abundance of knowledge about his squad.

But that is exactly the situation for Patrick O’Boyle.

He served as offensive coordinator last season and now is driving at full speed behind the wheel of the Lee Williams High School football team.

“It’s a definite advantage for myself, personally,” O’Boyle said of his familiarity with the Vols. “And thankfully I also have a very, very good coaching staff with me. Guys that I trust, guys that I believe in and guys that are going to work hard. I do know most of these kids, having either taught them at one point or coached them at one sport or another – either baseball or football.”

O’Boyle and the rest of the coaching staff were hard at work Wednesday afternoon leading individual units – from linemen, to quarterbacks to receivers and running backs.

Each group ran different drills and focused on making improvements.

“I like the energy, I like the enthusiasm,” O’Boyle said. “The kids are really locking in and staying focused. Right now it’s about making ourselves better. We’re not worrying about competing against anyone else. But just getting better by ourselves every single day.”

The Vols may only be in their second week of spring ball, but the determination was visibly apparent from each and every athlete.

However, there was still a different vibe as Lee Williams was missing a large group of key contributors from a year ago.

Starting quarterback Enzo Marino is gone, along with role players Cody Ferrin, AJ Herrera, Hunter Sturgill and Cameron Ott. But that’s not all – the Vols didn’t have twin brothers Matt and Mike Bathauer.

However, O’Boyle isn’t looking in the rearview mirror and instead focusing his eyes on the future of the program.

“We’re adjusting to things we think are going to be good for this group of kids,” O’Boyle said. “We’re changing a few things up – changing some assignments up, changing some schemes up. But these kids are really buying in and getting after it the right way.”

But as is the case for every team across Arizona, some athletes can’t be out on the field as they are taking care of academics with the school year winding down.

That is always a tough situation, but O’Boyle has seen positive results from the ones who can participate.

“The kids who are out here every single day have definitely gotten a lot better,” he said. “And we’re getting better as a whole unit, and that’s what I really like this year. We’re getting better freshmen through going-to-be seniors.”

The most important improvement, however, won’t be seen until the Vols lace up their cleats for their first game of 2019. Lee Williams will look to make positive strides after finishing 3-7 last year.

But O’Boyle is well aware of what needs to be done to put that mark in the past.